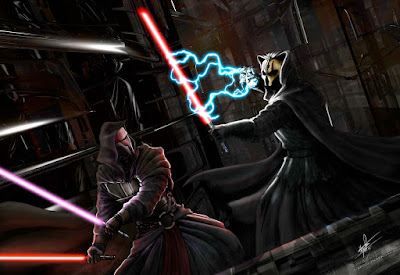 Today, many Steam users may have noticed a scheduled update pop up in their download list, which by itself would not be an unusual occurrence but this update is for the classic and frankly fantastic RPG based in the Star Wars universe.

Although not quite as good as its older brother in many peoples opinions, KotOR2 is fully deserving of its cult status and ranking as one of the best Star Wars games to be made.


Today's update has not only come out of nowhere with no announcement but it has also added some of the most requested features, 10 years after its original release and 3 years after its inclusion in the Steam store. I feel like many big developers could learn something from Obsidian Entertainment here in reacting to fan demands. Obviously these updates are not just done for the fans sake, they are additions to the game ready for the release on Mac, Linux, and SteamOS. But who are we to complain even if they are not made specifically for old fans?


So what does it bring to make people so excited? Well for a start the addition of 5k resolution capability. For players like me, being able to downscale from 5120x2880 to 1920x1080 is a huge addition giving a cleaner and overall better looking game which most modern systems are able to run quickly.


That's not all though, below are the other changes made in this update:


There is one more highly unexpected addition too, the native inclusion of the "The Sith Lords Restored Content Mod". Many fans will be familiar to this 2009 mod project but for those who are not it basically worked hard to re-add everything Obsidian was forced to throw to the cutting room floor because of release window pressures. This includes weapons, armours, side story and character story sections, a big section of the main story which takes play on a whole new planet!

Far from the biggest update that has ever been seen for a game, with several games recently getting entire expansion packs released 10 years or more after original release but it will absolutely be warmly received by fans and new players. And with KotOR2 currently being on sale on Steam for just £5.25 there is no reason why everybody shouldn't be picking up this gem!
Posted by Unknown at 20:37
Email ThisBlogThis!Share to TwitterShare to FacebookShare to Pinterest