Digimon World Re:Digitize or simply Re:digitize from here on was developed by Tri-crescendo and published by Bandai Namco games on the PSP in Japan back in July 2012.

Re:digitize returns once again to the roots of one of my most beloved series, back to when I believe Digimon was at its best with the original Digimon World on Playstation. The PSP title uses the same mechanics that appeared in the Playstation title from raising your own monster e.g feeding them taking them to the bathroom, training them ect as well as returning File City to its former glory by getting other digital monsters to join. Same core mechanics have been upgraded so to say think of it like Augumon Digivolving to Greymon. 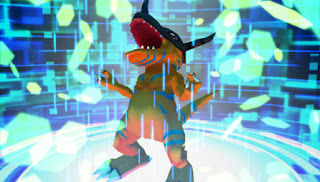 The story opens with you winning 3rd place in the Digimon online Battle Arena when suddenly you're asked for a code word. You eventually use the word Re:digitize and find yourself transformed into digital data and sucked into the digital world (insert your choice of Digimon theme song) only to awaken with your monster coming to your aid and beginning your adventure to save File City from the evil plaguing it and return home, maybe even making some friends along the way ? 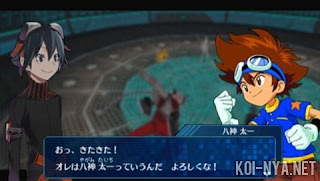 As stated any fan will feel right at home for the most part with this title being very similar to the original. However this is the evolved version and as such there are in fact some changes, the biggest major difference is that there are now other humans in the world. As well as this you can now digivolve up to mega level, well up to mega 2 and 3 but you will have to figure that out yourself. The raising of your partner seems much more balanced, offering a wider variety and making it easier than before to face the challenges coming your way. The city itself has a much more built up look to it and new zones but most changes are functional over cosmetic this time round and though you are given most basic facility's from the start this time upgrades to them will be essential. Top this off with a 3D look and much better visuals overall this makes it something new for existing fans and more modern for newer fans. 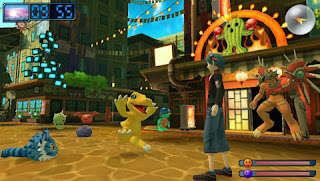 I don’t know if anyone reading this had a Tamagotchi growing up (but I hope most would know of them) but that's the easiest way to think of this. You are now a tamer, master of your own digital monster while progressing with the story you will have to feed your monster with meat from the meat farm, take him/her to the bathroom to go potty don’t want to get digital poop all over the shiny city now do we? And train your companion in order to survive tougher battles and Digivolve into a more powerful form, But there is a catch as they only live for about 10-15 days were you have to start all over again while this is not new to the series for the first time it actually feels limiting pressing you to make each moment count. In this allotted time time you have to bring monsters to the city, find and stop the evil that plagues the world, complete quests, win in the arena and more making this game jam packed full of things to do and leaving your play-style up to you.

As I have said the visuals have had a upgrade since the original and this comes from Suzuhito Yasuda who worked on SMT: Devil Survivor. Though a little outdated now, for a PSP game from 2012 I was quite happy and a little excited when I started playing, much like the feeling I had when I first played Digimon all those years ago.

Now we get down to my gripe with the game which if I am honest annoyed me to no end as everything else was done so much better than the original. The battle system for some unknown reason I cant fathom despite having bigger monsters and being in 3D and losing the birds eye view. When you enter a battle the battle zone is actually smaller than it was or at the very least seems that way, most of the time making it nigh on impossible to dodge attacks as well as any high level monster having AOE attacks that cover the whole field. If that wasn't bad enough everything that you encounter is much tougher than you would expect, it then proceeds to take it one step further and make it so the other humans trying to help you can take part in in major boss battles limiting the space even further. 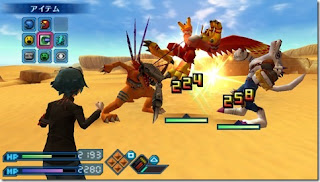 If you can deal with all of that then battles are quite simple (providing you don’t stray into a zone your not ready for) if you have a stupid monster you pray it uses the moves you want if you have a smart one then you can yell commands or leave it to do what it wants and the battle will play out without your input except as a supporting character using items to restore hp/mp, revive etc. Quite simple and straight forward once you get the hang of it however the difficulty does love a good spike.

In closing this should have been the relaunch of the Digimon brand the West had hoped for but sadly it never arrived, and minus the battle system that I would honestly hope they would just pan out the camera a little more, it is the upgraded version of one of the best monster/tamer titles I have ever played and I am quite disappointed we didn't see this out West when we got many of the more inferior titles.

Posted by Unknown at 16:12
Email ThisBlogThis!Share to TwitterShare to FacebookShare to Pinterest