A novel masterpiece, or horror story?

Steins;Gate is a Japanese visual novel developed by Nitroplus & 5PB and published by 5PB. Originally on Xbox 360 in Japan in October 2009, then on June 5th 2015 PQube published it on PSVita in Europe. It is the second in the science adventure series following Chaos;Head and before Robotics;Note. 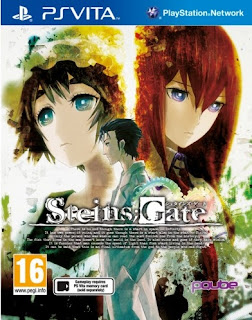 The game centres around Rintarō Okabe, a self-proclaimed mad scientist and head of the “future gadget laboratory” also known as a dingy apartment above a TV store, who in his attempt's to make the gadgets of the future and plunge the world into chaos manages to make his greatest scientific break through. Okabe, along with his friends Daru (the super haka) and Mayuri (the absent minded childhood friend), create a time machine!! Along the way you will make many more friends from world-renowned scientists to time travellers and find your self in heartbreaking moments with some of the most bizarre I have seen from any story. 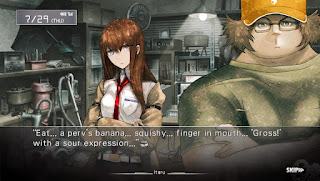 While creating their latest gadget the phonewave, a microwave you can call to get it to start cooking, they stumble on a way to send emails to the past and alter their timeline due to the butterfly effect. Throughout the games story you and your friends will experiment with this amazing device and even improve on it, causing you to change history and the present in huge ways. Though only Okabe can perceive the change between world lines which ultimately landing himself in more trouble than the heroes of the most far fetched anime’s. Will you be able to save the world, or will you be the reason it burns? Your choices shape this world.

The story as stated is a visual novel and almost the entirety of the game will be seen this way with a huge amount of text, 2d character models and the same handful of reused backgrounds from around Akiba, even then most of the time will be spent in the apartment. In fact the text based story makes up about 95% of the game, your only input is the progression of the story with X and the interactions with the phone to make different choices. Even then it is a simple case of making a selection of a pre-set topic, though each choice will have an effect on each play-through causing changes big and small to events, which can leave you locked out of some things or experience a different ending. Fortunately this heavy emphasis on the story means that the narrative itself is quite intriguing, causing you to want to know what your latest decision has caused and leading to some of the best endings I have seen from similar games. 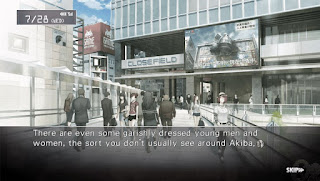 The games visuals are another area that leave something to be desired but being a port of a 16 year old game that would be expected, but there are only so many times you can see the same thing being reused before wanting to scream ie. blank expressions, reused backgrounds and tv's that the images don't change on despite you watching. While not the worst thing ever it can still be a huge annoyance. 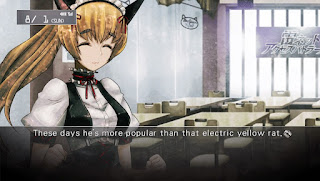 On a better note the sound section had a little something I found rather interesting, you can change your ring tone and even get new ones sent to you, this also extends to wallpapers for your phone. Though this was a interesting little distraction the main use of the sound in this title comes down to setting the tone of the story itself while not offering a lot of variety once again, the few tracks that are used work quite well when adding suspense or setting the tone of a warm summers day. 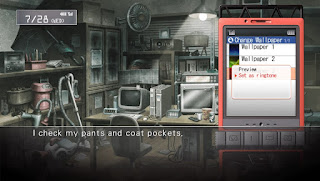 When it comes down to the bottom line what your getting here is a slightly more interactive visual novel, loaded down with text that can be a little difficult for some to follow at times. Whilst an interesting story and quite dark at times, the limited interaction will cause many to be put off. It also ranks as one of the most complicated visual novels I have played, which is perfect for die hard VN fans that are interested in a dark story of time travel and cause & effect. I would absolutely recommend this title.

Posted by Unknown at 21:20
Email ThisBlogThis!Share to TwitterShare to FacebookShare to Pinterest