Snaaaake, we're not finished yet! 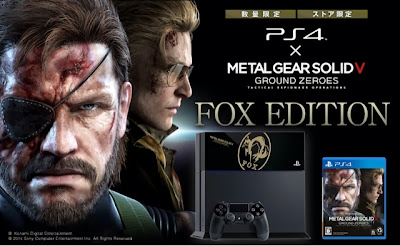 
Konami have released some techinical details comparing the game between Current Gen and Next Gen - Next Gen/Current Gen Comparison
There are no comparisons between console brands but there is a nice table of stats at the end.


Kojima hinted about a custom PS4 console last week but today it has been revealed as the truth.

The console is very much like the original but it comes with a fancy Golden fox logo.

Another thing we learnt about Ground Zeroes is that the PS4 is displayed at 1080p where the Xbox One is only 720p. The upside is that they both run at 60fps, so it will be smooth gaming all around, but the console war still rages on!

The console will launch along side the gameon the 20th March for 46,980 Yen in Japan.

Ground Zeroes is set to release in the EU on 20th March and US 18th March.

Posted by Unknown at 17:48
Email ThisBlogThis!Share to TwitterShare to FacebookShare to Pinterest