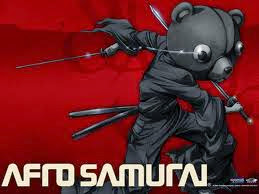 News of a return of the Afro Samurai has been announced. Heading his way to the PC/PS4/X BOX ONE in a 3rd person adventure created by Redacted Studios & Versus Evil.


Info is scarce at the moment as more is to be announced in the coming months, what we know now is it'll be 3rd person, hack and slash, feature new combos and have Co-Op with Afro's rival Kuma.

Expect more in the coming months and a certain Andi of our site couldn't be happier that the series is making its return.
Posted by Andi at 11:09
Email ThisBlogThis!Share to TwitterShare to FacebookShare to Pinterest