Battle Princess of Arcadias. A title that seemingly appeared from nowhere when announced for the Playstation network a few months ago via NISAmerica. A colourful, fairytale-esque, side scrolling 2D RPG featuring Princess Plume is what we have before us (Our very own Aisha has entered a cosplay competiton as Princess Plume. While your here, Why not drop her a [Vote]) So does the Princess rise to the throne to be crowned queen? or does her ascension end before she has a chance to reign? Lets turn the page & find out... 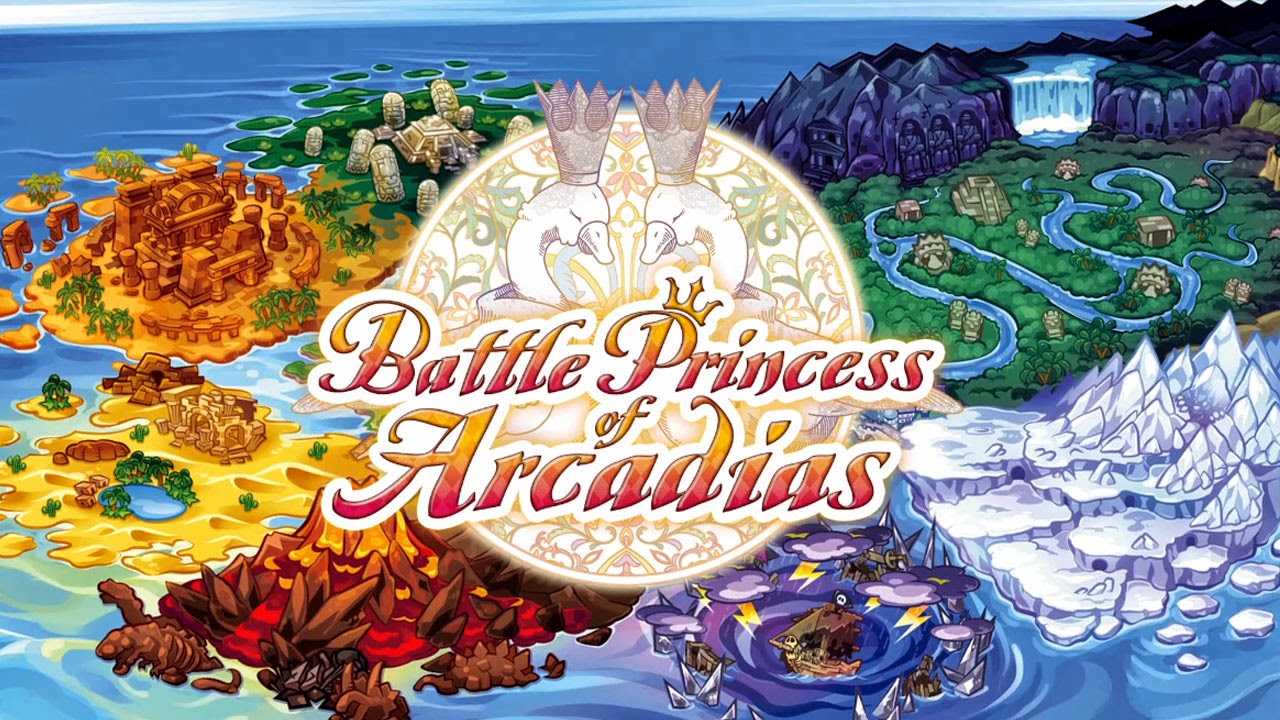 The game focuses on Princess Plume & her journey as the battle princess for the kingdom of Schwert. The game opens with Plume arriving too late to a skirmish, with her squire & brigade wiped out by a dragon that manages to escape.  Plume makes it her mission to rid her kingdom of the countless monsters that continue to trouble her citizens. Once her new squire Raltz arrives & Yuni agrees to join plume, their journey begins with the dragon that wiped out the Princess's former squire and brigade being the first target. While the story remains light with many an amusing moment, I found myself not taking to the cast much. Aside from the brilliantly energetic & sugary sweet Plumie, almost every other character didn't quite come as close. Theres a total of 10 playable characters that have parts within the narrative, so their varying  personalities may click with some more than others. Thankfully theres plenty to do to keep one interested. The kingdoms capital city acts as your central hub. Here you'll find a weapon smith that allows you to upgrade/enhance weapons, a merchant that sells & buys items/weapons etc, Barracks to upgrade your brigade and a castle with numerous areas to explore. Variety extends out onto the battlefield too as the wealth of levels are spread amongst numerous themed areas which also house unique enemy types within. The deserts in the north for example house scorpions that you wont find in other areas and the general variety of enemies on show is pleasing. Completing levels showers you with money, weapons & items of varying value that can either be kept or sold instantly for gold. This all helps with giving reward for the grind. There will be quite a few times when the next stage you have unlocked will seemingly house a difficulty spike that requires you to return to previous levels. This is where the variety in the games design really helps, and its always good to farm items to enhance weapons with & level up or increase your honour rank with party members of course (a higher honor means that character will support you with attacks etc during levels automatically) You'll quickly realise too how important it is to have lots of gold, especially when it comes to levelling up your brigade for skirmishes (although they can only be levelled as high as their commander) Still, the difficulty spikes do happen a little more than they should in truth that even those fond of the grind may become annoyed on occasion. 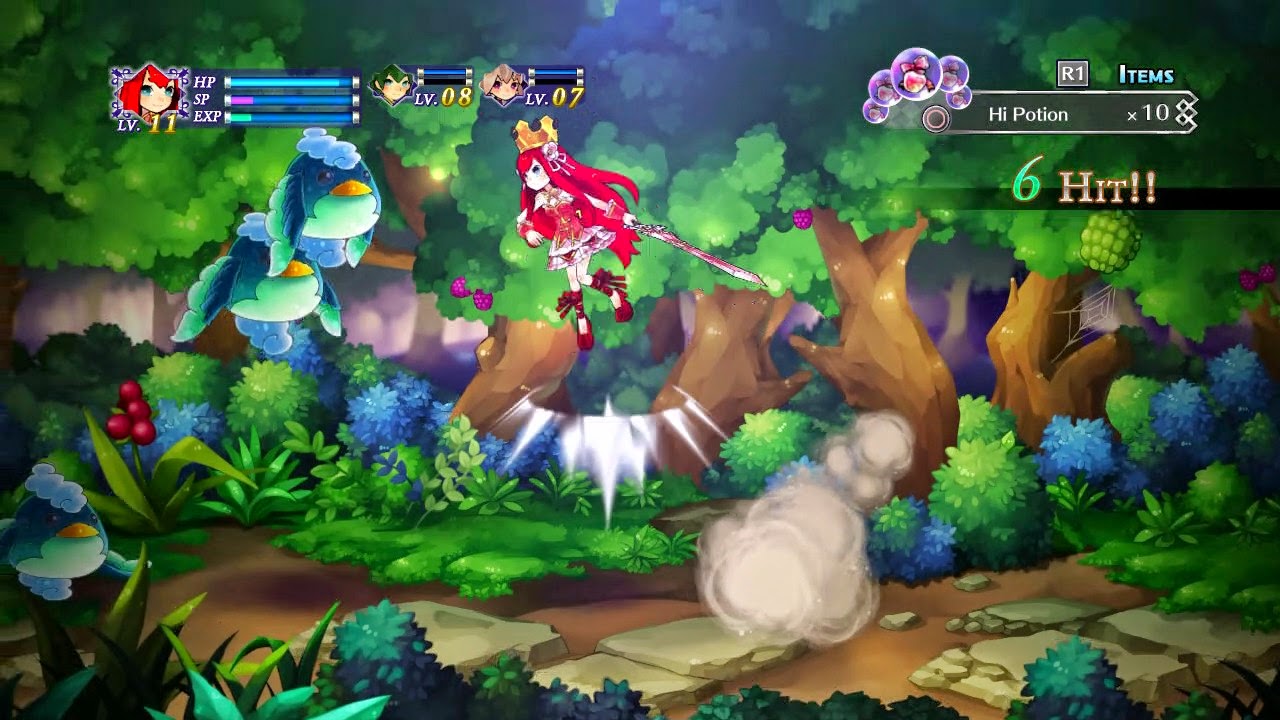 The variety in Gameplay types for this game is probably the titles strongest asset. As you would find on most outlets, its described as a side-scrolling Action-RPG. This is true somewhat as a fair amount of the game is played out this way, but things get mixed up as other level types like Siege & Skirmish are thrown into the mix. Combat is smooth, although not as fast paced & as slick as you would expect, not being able to cancle moves mid-animation to block for example. Then you realise your playing an ARPG not a Hack & Slash, but its something to get used to still at least. The game is also played out on a complete 2D plane which thankfully negates the need to judge planes, keeping the combat simple as a result. Depth is brought in by numerous aspects with the games combat. There is a basic combo system that expands as you level up a character, for example, and extra abilities and perks that have an effect on how your character performs can also be unlocked this way. Its when the other modes come into that play that the variety of the game is spiced up even more. Siege acts as a boss encounter of sorts. Theres usually a strong enemy that needs defeating, but its not just down to your 3 man party. Nope, you'll also be using your royal brigade. Victory is obtained by defeating the monster, but defeat can come either by all your members being killed or your entire brigade being destroyed. Issuing formation changes on the fly gives these encounters added depth as increasing the morale of your brigade and managing troop count (your brigade slowly regenerates) can help ease you through these, at times, tough sections. Skirmishes work in a similar way, except you'll be fighting another brigade with your own (here's where upgrading your brigade comes into use) Here certain weapon types have strengths/weaknesses to others and defeating brigade leaders can give you the morale boosts you need to stave off defeat and unleash special moves or issue commands & formation changes. As you would expect of a game trying to apply some strategic nous to an action based combat system, there is a learning curve. Holding R1 & pressing triangle shifts between your items/brigade commands with circle & square shifting between the tabs with each of those sections. This happens in real-time during combat, the game doesn't stop, which is why you'll need to acclimatise as it can make the first hour as you get used to the less-than-slick combat a trail of patience. Once you've mastered it, it works well enough to not hinder your combat capabilities. 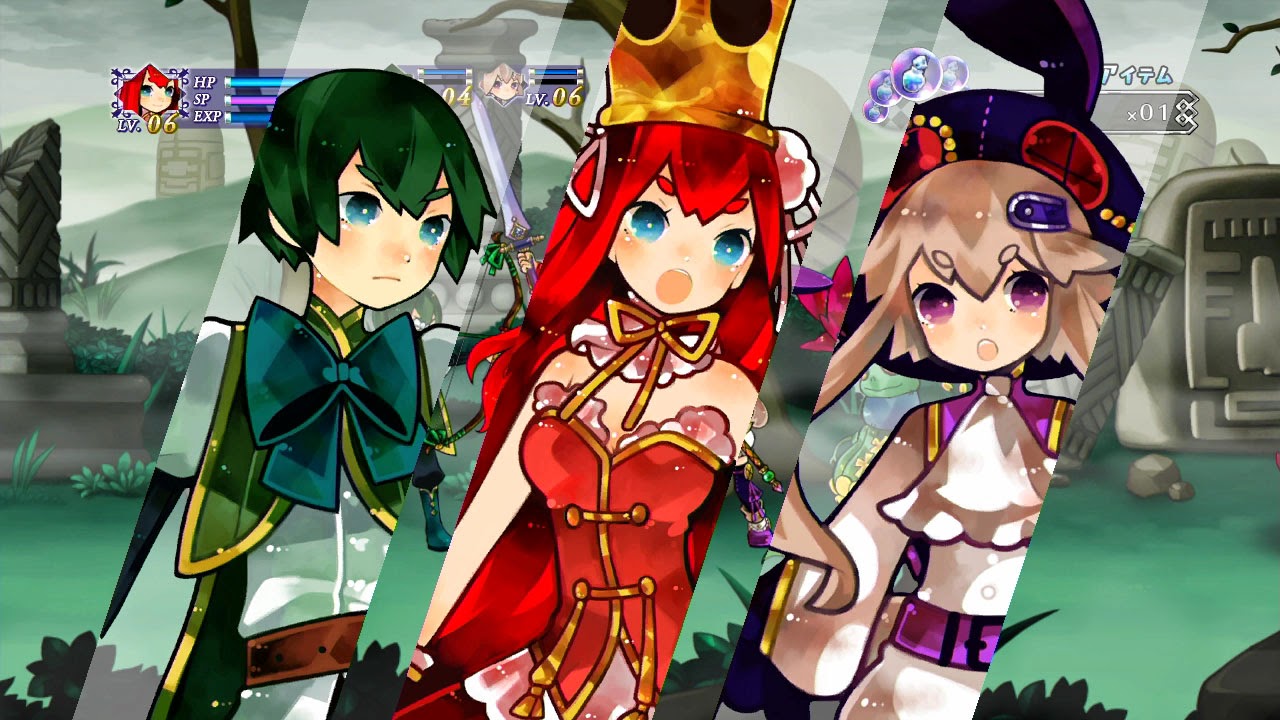 As you would expect for a 2D  side-scrolling RPG, the games visuals are stylised. Instead of going down an artistic route as has become the norm of late, instead NIS look to have gone for a Fairytale look. Colours are bright & punchy, with differing shades of colour used instead of harsh lines for detail on characters. Detail on the sprites can still look though, as enemies in particular with their wealth of variety show. Boss characters in particular can still have intricate detail whilst maintaining parity with the games visual style to look great at times. Its a similar story with the games cast too. Each is packed with personality and individual nuances to make them recognisable in battle with unique animation sets and colour schemes setting them apart. The games animation can, sometimes, look a little wooden. I'm not sure whether its intentional or not, but that's the impression I get from the game & it would also partly explain the games combat being the way it is. Its no deal breaker mind, and the little embellishments during dialogue (comic book style word, flowers, stars etc) that spring up occasionally are a nice touch. Backdrops are as colourful and detailed as they are numerous during the games many stages, with multiple layers giving the illusion of some vista's and depth to the 2D image. Thankfully the games framerate tends to remain solid, with only the rare stutter. even when the screen is full of enemies & special effects from your characters special abilities, the game does a great job of keep everything plodding along smoothly. The games audio is another area that is done well. As you'd expect, full voiceover work is provided for all the characters during the game and each is done well. Its the games BGM though that takes the crown with regards to the games audio. The music is always fitting for what is transpiring onscreen, but on the odd occasion the game will throw out an  unexpected music track (the first boss fight in particular) that compliments the action. The games presentation may be hit & miss for some, in the way that its fairytale book leanings may not be preferable to how its peers are styled - but theres little to fault with the games overall visual & sound quality. Princess Plumie's sugary sweet fairytale world, with the princess herself being as standout a character as you'd expect - sets a decent backdrop packed with its variety, even with the lightweight story, to keep one entertained. The variety in gameplay is great too, but then the added effect of that is the learning curve is perhaps a little steeper than expected with the game rife with difficulty spikes & its combat mechanics perhaps not being as slick as its peers too. While other action RPG's out there may be more slick, there's a lot more to Princess Plume than meets the eye and once mastered, you'll be defending Schwert for many an hour.

Posted by Unknown at 21:54
Email ThisBlogThis!Share to TwitterShare to FacebookShare to Pinterest