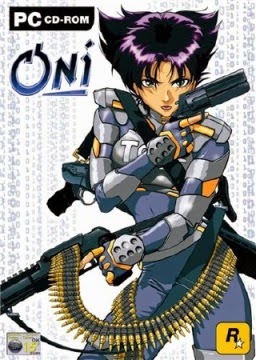 When you read that word, what first came to mind? I’d wager it would be one of two things: either a death defying recreational form of jumping involving a long length of rope that you’d pray wasn’t contracted to the lowest bidder, or if you’re a video game enthusiast, you probably thought of Bungie, the company responsible for Halo.

Say what you will about Halo, but it contributed significantly to the console scene as we know it today. It, I would argue, single handedly entrenched the original Xbox and allowed it to survive a burgeoning release against the very popular Playstation 2 until the third party library it had became more plentiful, and one has to wonder what the console market would be like without it having allowed the Xbox to take root as a brand name. Yet Bungie’s work does not just include Halo (and Destiny), and prior to their commercial magnum opus they had created such games as Marathon, which was released in 1994 as a sort of Mac only equivalent to Doom and showed the possibilities of first person shooters both technically and narratively, quite an achievement for the time. Myth was their follow up as a fantasy strategy game which focused on micromanagement rather than base building, and like Marathon that was also a critical and commercial success. What followed was the subject of today’s review, Oni, the only game released by Bungie West prior to the buyout of the studio as a whole by a Microsoft, and where Marathon and Myth are critically acclaimed if somewhat obscure classics and Halo is the cash making juggernaut that gave Bungie license to build a Scrooge McDuck money pool. Oni stands alone. It is Bungie’s odd one out in their back catalogue, neither as well loved or remembered as Marathon/Myst or the goldmine that is Halo, and that is perhaps because it stands out as what I can only describe as a kind of a mad science project. 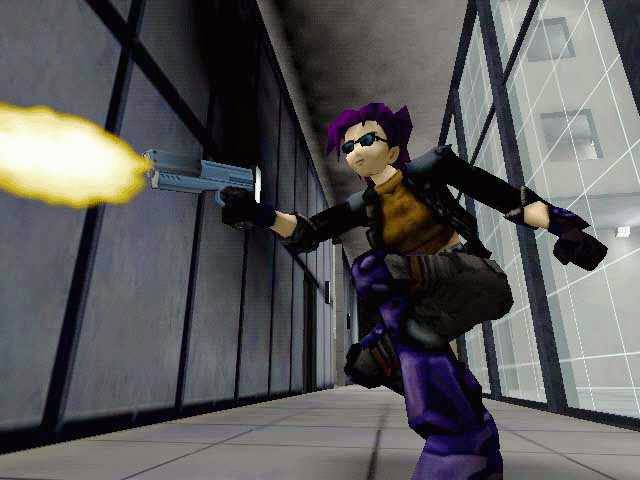 Oni is set in the year 2032 and if the game’s cover art at the beginning of this review didn’t clue you in, the setting, plot and style of the game draws heavily from Ghost in the Shell. Our protagonist, Konoko (voiced by some lady you’ve probably never heard of before…) is an agent for the TCTF, the Technological Crimes Task Force, or as I like to call them, the RIAA of the future. The planet is on the brink of ecological collapse and the totalitarian world state of the World Coalition Government maintains an iron grip on its populace. However, a crime syndicate called... The Syndicate… has set in motion a terrible plan that Konoko must thwart while also learning the truth of her own mysterious origins.

About the best comparison I could make for Oni is to liken it to something like Sleeping Dogs minus the open world aspect (which I’ll get back to later). The game is all about third person brawling and gunplay with a bit of platforming to boot as you pilot Konoko through levels knocking seven different kinds of stuffing out of enemies while occasionally engaging in light jumping, puzzles and even laser traps and turrets. Stealth is an option also but only at certain points and is nowhere as robust as the actual fist fighting but its presence is not unwelcome for the few times it is useful. 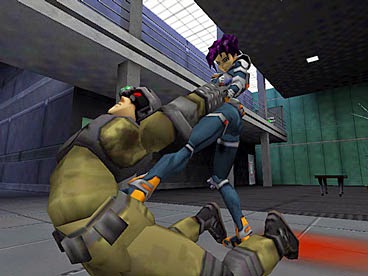 Konoko’s movement feels unfortunately a bit tanky at times. It isn’t quite as sluggish as the likes of Resident Evil but for a game based around hand to hand combat it harms the fluidity markedly. Oddly enough this is compensated by the lack of a lock on feature: all melee attacks you make must be directed manually by yourself. There is some auto aim with the ranged weapons but beyond that you’re on your own with landing your hits accurately. This has the somewhat contradictory effect of making Konoko’s tanky movement feel less constraining in combat as you’re not being guided by an invisible hand, but also can cause some frustration, particularly as enemies will attack you from off camera without hesitation unlike in most spectacle fighters. Platforming segments can also prove annoying particularly with the laser trap segments as in order to sprint you must double tap the forward key or the stick forward rather than the more intuitive and modern idea of a sprint button, so obtaining the necessary motion to make certain jumps is not exactly plain sailing. 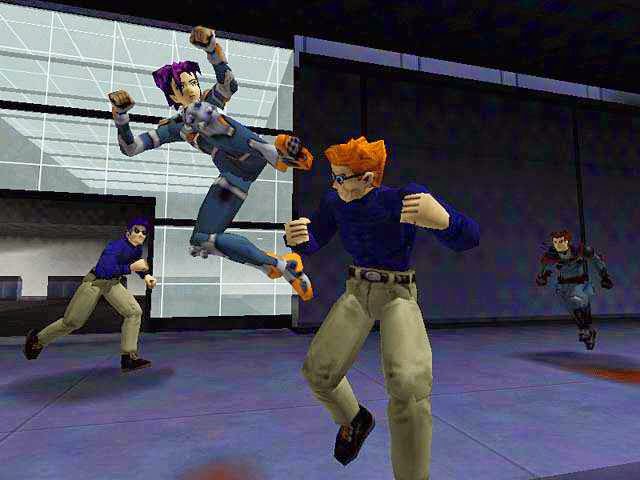 But when the combat works, it works magnificently. The sound design of Konoko’s attacks lend themselves to a bone crunching, brutal affair as you rain blows on opponents with a variety of visually pleasing kicks and punches, including a dashing command throw that snaps an opponent’s neck *and* uses them as a pivot for a spinning kick to other enemies nearby, although sadly Konoko lacks the one inch punch. She does however gain new moves as the game progresses and each of them provide another satisfying addition to her arsenal, including the super moves replete with anime move name calling (but no speed lines sadly) such as Devil Spin Kick or Rising Fury. Blocking is accomplished just by facing the opponent directly and unlike more modern brawlers like Rocksteady’s Arkham series there is no counter feature. I wouldn’t say the fighting system is deep, as it’s just about finding openings and not taking damage rather than any deeper strategy, but the lack of a freely available counter move is a refreshing throwback. The AI is also actually decent, with enemies moving for guns dropped on the floor if they're close by and using some surprising attack strings that can lead into throws, catching you off guard if you're playing complacently. 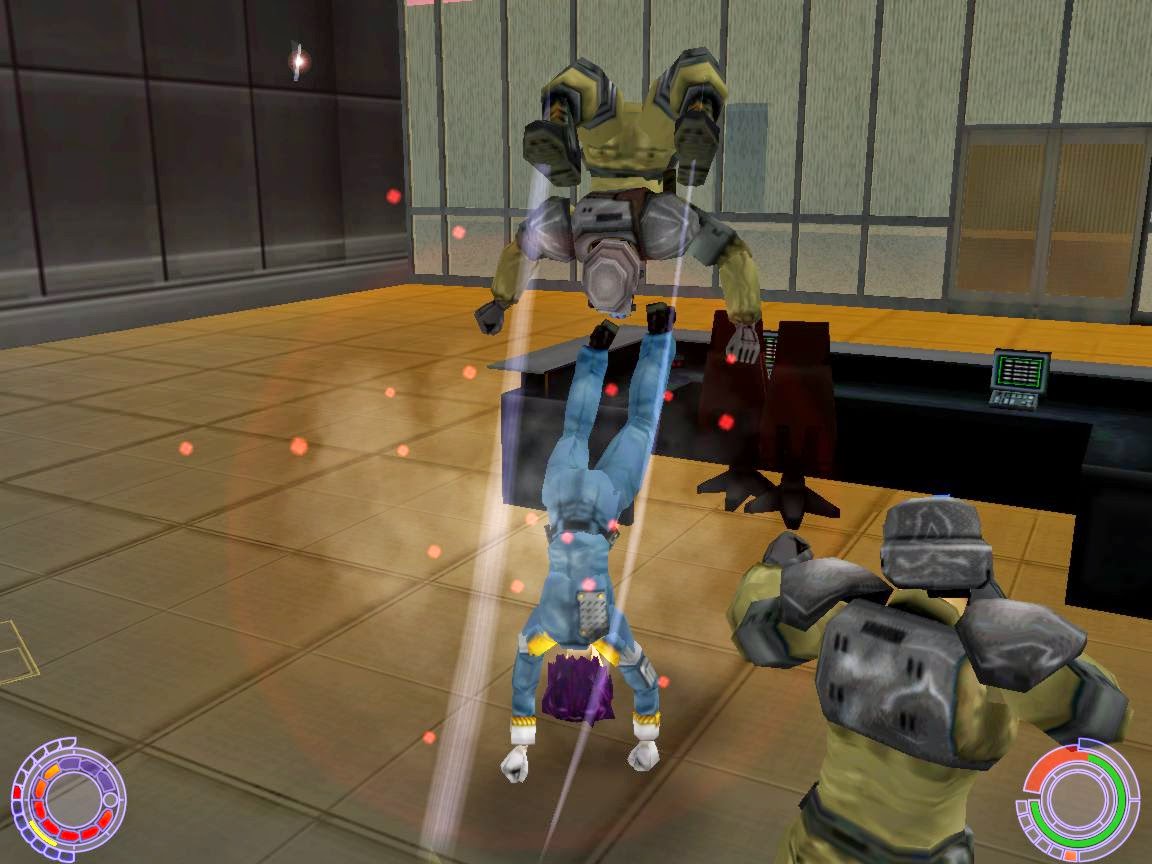 Level design, however, is one area that Oni does not do well in. In one of those strange advertising bullet points that sounded far better in the boardroom than in practice, Oni’s back of the box blurb once stated that the game’s level were “designed by real architects” and boy does it show. Levels feel like lifeless mannequins, undressed and naked with the barest of details and not a drop of verisimilitude. The offices of the TCTF Headquarters for example are mostly just boxy corridors and rooms filled with steam tanks, desks with information terminals and little else. Half Life, a game that preceded Oni by three years, had environments that lived and breathed far more than Oni’s dusty and drab mausoleums that pass for levels ever did. Only the Rooftops and the dream sequence level show any kind of atmosphere or redeeming elements to their design that elevate them beyond little more than an exercise in rudimentary geometry. 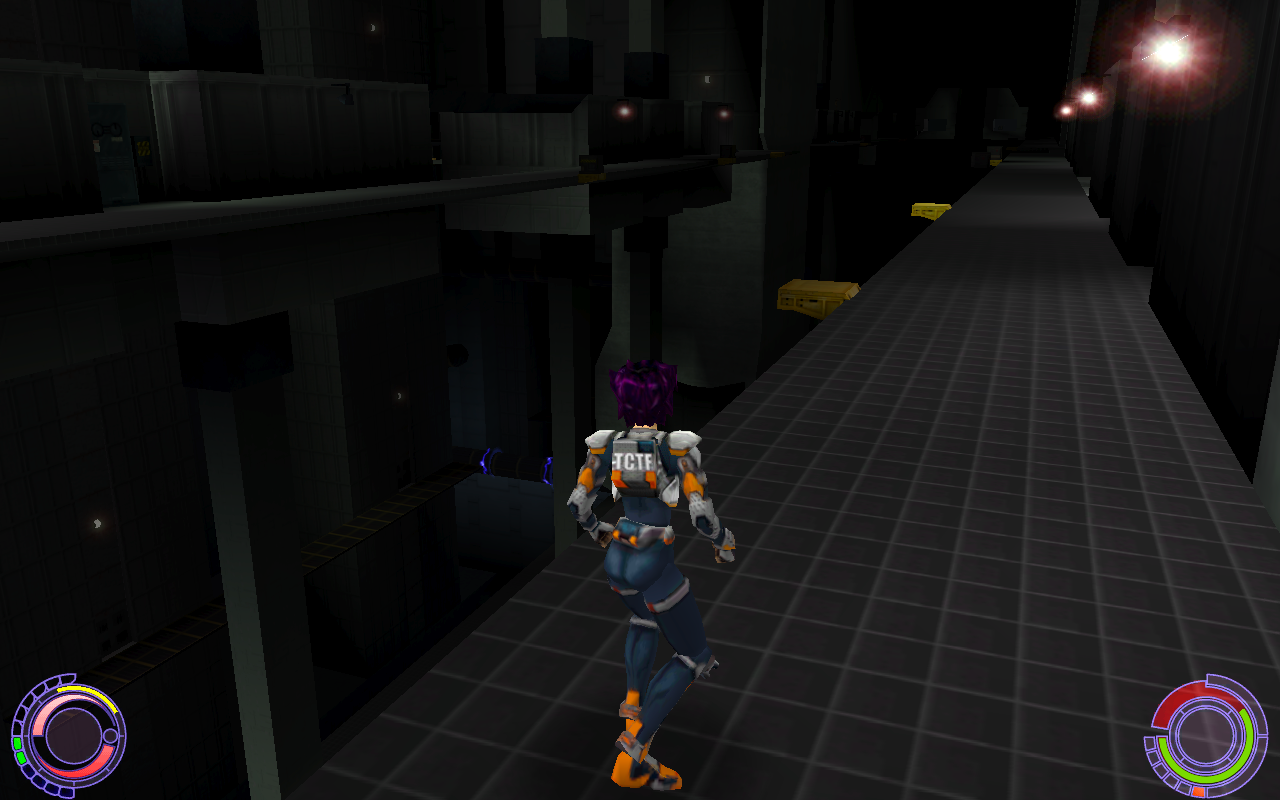 The story similarly feels without much meat sadly. While I don’t doubt that the makers of Oni were enamoured with anime and Ghost in the Shell in particular, there isn’t much to note in the game itself. The game’s big twists don’t redefine Konoko’s character in any way, and furthermore unlike Major Kusanagi she never asks the big “Who am I?” question in any way beyond testing it at a surface level. There is a moral choice later in the game that while seemingly probing of Konoko on the surface has no real outcome on the game’s plot beyond the form of the final boss (note that I said form, not that it's a different character) and the logical pathway of the decision leading to you fighting this alternate form makes no sense whatsoever. It would be like saying that dating Tifa instead of Aeris at the Golden Saucer in Final Fantasy VII causes you to fight Yogg-Soggoth instead of Sephiroth at the end of the game; it's just a non causal path from A to B.

The aesthetics of the game at least are above par, with the graphics being okay for their time and the various enemy types visually memorable; particularly the Tankers who just simply CAN'T BE TOPPED, as they are fond of saying. The guns range from basic pistols to a cannon that shoots a wailing soul sucking spirit at enemies (basically the Kim Kardashian rifle), so there’s plenty of variety there, although ammo is scarce by design. I also pointed out before that the sound design is pretty solid in melee, but the guns also have a good feel to them, and the music is used well to give levels atmosphere where they otherwise fail visually to create such sensations. Particularly of note is how lengths of silence are used in place of music to help punctuate certain sequences that elevate them above middling fare. Indeed, the game’s greatest feature is an unofficial “New Game+” mode activated by cheat codes (remember when they were a thing?) that allows you to play as any character in a level, replete with their movesets, which is hugely entertaining. Want to play as Muro in the Airport level and destroy people Jet Li – The One style? You can! 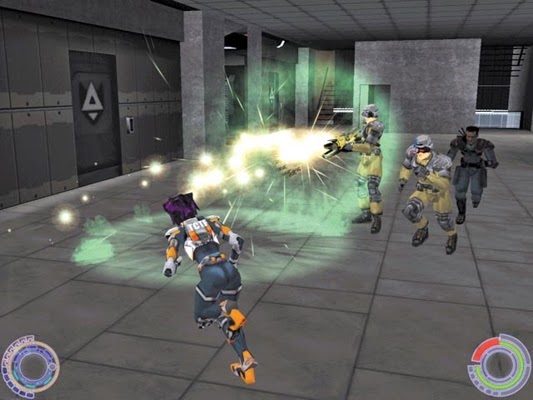 But none of this unfortunately brings Oni beyond what it is: an undercooked game. Yet let’s not misunderstand this metaphor. Oni feels like it had potential as raw material, but for whatever reason: time, technology, money, direction (or the lack thereof of any of the aforementioned things) it didn’t quite come together. I had fun with it, certainly, but I feel like it could've been a true classic in other circumstances. A more modern open world design would’ve done wonders for the story, atmosphere and gameplay, plus a few other touches like lock on for example. Just thinking about the likes of Platinum handling this game makes me salivate.

Yet, what we have is what we have, a strange misfire from Bungie that either because of or in spite of Halo’s success has become part of their history as the forgotten redhead of their family. This is reinforced by how relatively hard the game is to get hold of: it’s not on the PSN store in the PS2 library (and then there’s the issue of backwards compatibility for PS2 copies on the PS3, thank you very much Sony…) and the PC version is not on Steam, Origin, GOG.com or even for sale from official retailers online such as Amazon, instead being sold second hand. I obtained my copy for around £20 but a more recent search on Amazon turned up copies being sold for £35 or more, at least at the time of writing.

Oni is a curiosity, an experiment I’d argue. But not a failed one, rather one that didn’t bear the results Bungie might have hoped for due to insufficient resources. Yet even testing that bears no significant results can be useful in the world of science, and here with this game if you can obtain a copy easily and cheaply enough, I’d certainly recommend it as a taste of Bungie before Halo became their raison d’etre, and of a game that might have been so much more.

N.B. - A word of warning to PC or Mac users who buy this game: Oni will likely not work on modern systems without patching. Use this to get the game to run.

-       - You thought Shadon1010 wrote this review, but, it was me, Dio!
Posted by JD at 22:08
Email ThisBlogThis!Share to TwitterShare to FacebookShare to Pinterest