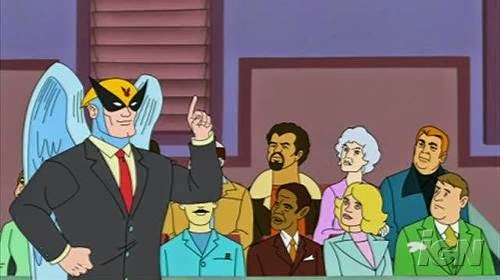 Harvey Birdman: Attorney at Law, a crime video game based upon a cult TV series of the same name, is centred on ex-hero Harvey Birdman. I say ex-hero because the whole series is a parody of itself. The show involves many Hannah Barbera characters and different crimes in which they have become involved in. One of my favourite is the old question regarding Shaggy & Scooby. Were they just hippies with the munchies? Well, they are put up on front of the judge for that said crime. The main character of the show is Harvey Birdman, who too did have his own show in the 60’s. To be honest, it is a show I had never heard of, until I started watching this. The show finally ended when one of the main cast moved onto a bigger things. It was disappointing that the show ended and I wondered if there would be anything else. For a while, there was no answer until I stumbled upon the PSP version of Attorney at Law. It was a good few years after it originally came out and the reason why I was unaware is that it was only released in the USA.

I could not wait to get this onto my PSP and I was not disappointed. Even from the start I was amazed by how much they had captured of the show. The title credits, the voice cast, the art style and the humour were all still present. It was like a missing episode was found! In fact, there are five episodes! 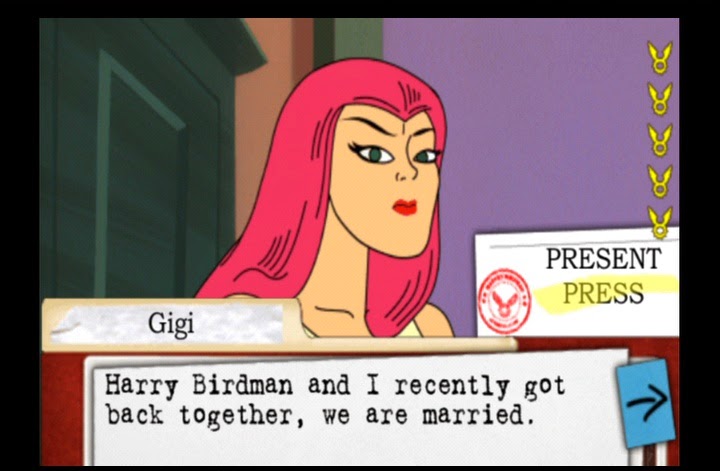 The game was developed by High Voltage Games and published under Capcom. With it being under Capcom’s belt, it was an obvious choice to use the Phoenix Wright engine and just re-skin it with the characters and art from the Birdman series. It plays just like the Phoenix games, right down to the court room scripts. You will always start at a crime scene in which you must investigate objects and people to get as much information which will aid you in the court room. All of the items which you need to look at are very obvious but these parts are not where the main game takes place. The main bulk of the game takes place during the court scenes. Here you must use everything you find to prove that your client is innocent. To carry this out you must present or object whilst witness (or your client) are given testimonies. It is a very smart game from the start – it encourages you to explore every pixel on the scene. Very much like old school point and click adventures and not these modern ones where you just interact with the story. Here, you can get more out of the basic story and you will be rewarded with fantastic scripting but whatever way you approach it, you will always end up back on the main story path. 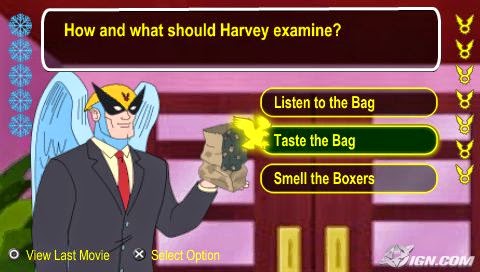 If you have played any Phoenix Wright games you will understand how to play the game without any effort. For any new players who are fans of the series and want to enjoy an addition to it, it will be easy to pick with very little effort as it is a very basic game. The difficulty spike is whether you are any good at solving puzzles using what is given to you. If you are hopeless at this then the fun ends but if you really want to play it you can find guides all over the internet for it but honestly it ruins the fun. The gameplay is very fluid and once you get use to how it flows then you will be in for a great ride. There are no slow points as you are always moving from scene to scene and then into the court room. The characters help keep the game fresh with excellent scripts which place well know characters in bizarre situations.

The script of the game follows that of the show. As I have said, the show is a parody of classic cartoons and situation which they could easily find themselves in and this carries on in the game. There are five cases present and they are all a good length at about two hours each, not including the first one as this is more of an introduction to the game. So in all you are easily looking at a 10 hour game. There is no reply value as the game has a very linear path and the only reason you would want to replay it is to re-watch all the cut scenes again. It is a shame that each case does not have multiple endings as this would easily triple the game time, but to be honest the time I played felt just right.

It would be hard to recommend this to someone who has no idea what or who Harvey Birdman is – in fact, if they wanted a crime game I would pint them in the direction of Mr P Wright. Why you ask? Well, to anyone who has seen the show, it is wacky! Seriously, the humour is bonkers and may not make much sense but it is perfectly executed. Characters are not fully introduced in the game, so new comers may feel a little lost in what is happening and again, the fun is lost.

In games like this you will usually find generic voice responses but in this you will find that every choice you make will have a fully voiced response. That is another brilliant thing about this game, all the original voice cast from the series is present and this is what makes it so great – thee attention to detail. They could have easily created a very poor detective game but they did not. They respected this cult show for what it was and created an excellent experience.

There is a lot of talking in this game, so if you are not willing to give it 100% of your attention, then you will not get the most out of this game. You may miss something and this will ruin the whole experience. There is case notes which keep you up to dated but if you do not know what is going on, none of the conversations will make much sense.

Best way to sum this up is very simple; loved the show? They this is perfect for you. If you want to try the game, my best advice is to sit down and watch the show. It won’t take long as each episode is only 10 minutes long and trust me, to get the most out of this game you need to understand what the show is about! 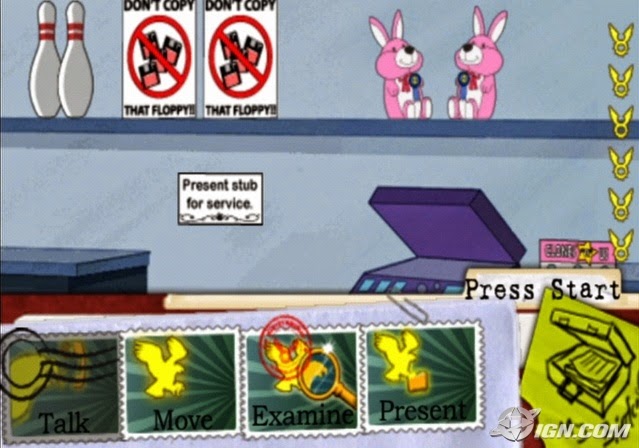 Either way, Harvey Birdman – Attorney at Law is a little gem which has easily been overlooked due it only being released in one region and that it is aimed at a very specific fan group but if you find yourself one of those fans then please do yourself a favour and play it. You will not be disappointed.

8/10
Posted by Unknown at 09:07
Email ThisBlogThis!Share to TwitterShare to FacebookShare to Pinterest