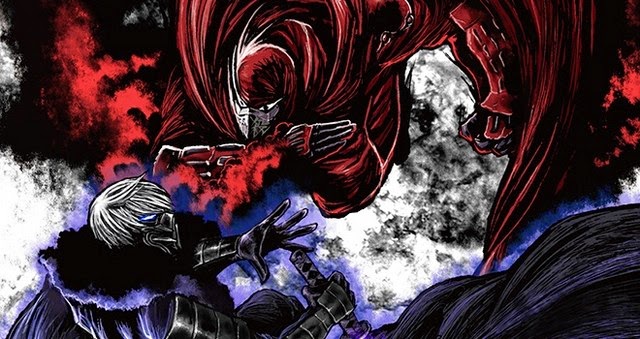 Remember when we mentioned a Ninja Slayer anime was to be discussed at Anime Expo?
For those that have been awaiting the news of that discussion, Studio Trigger have recently released the teaser trailer that was shown during the Expo. A story summary accompanied the release of the trailer, which you'll find below with the trailer:

Kenji Fujikido is a salary man whose wife and child were killed in a ninja turf war. In a brush with his own death, Fujikido is possessed by an enigmatic ninja soul known as Naraku Ninja. Fujikido cheats death and becomes “Ninja Slayer”—a Grim Reaper destined to kill evil ninja, committed to a personal war of vengeance. Set in the dystopian underworld of Neo-Saitama, Ninja Slayer takes on Soukai Syndicate ninja in mortal combat.
Posted by Unknown at 16:44
Email ThisBlogThis!Share to TwitterShare to FacebookShare to Pinterest