This is a game that slipped under the radar of most. While early trailers for Majin gained some interest, the game was quickly forgotten under the wealth of bigger budget releases at the time and was lost amidst obscurity. So why don't I take a look at the game & see if it'll spark some interest in you? A quick glance at the screenshots will probably leave you asking if this is somewhat similar to a certain other game, and while it does share some similar concepts to a game like The Last Guardian, It doesn't seem to aim for the same heights. So how does it fare? 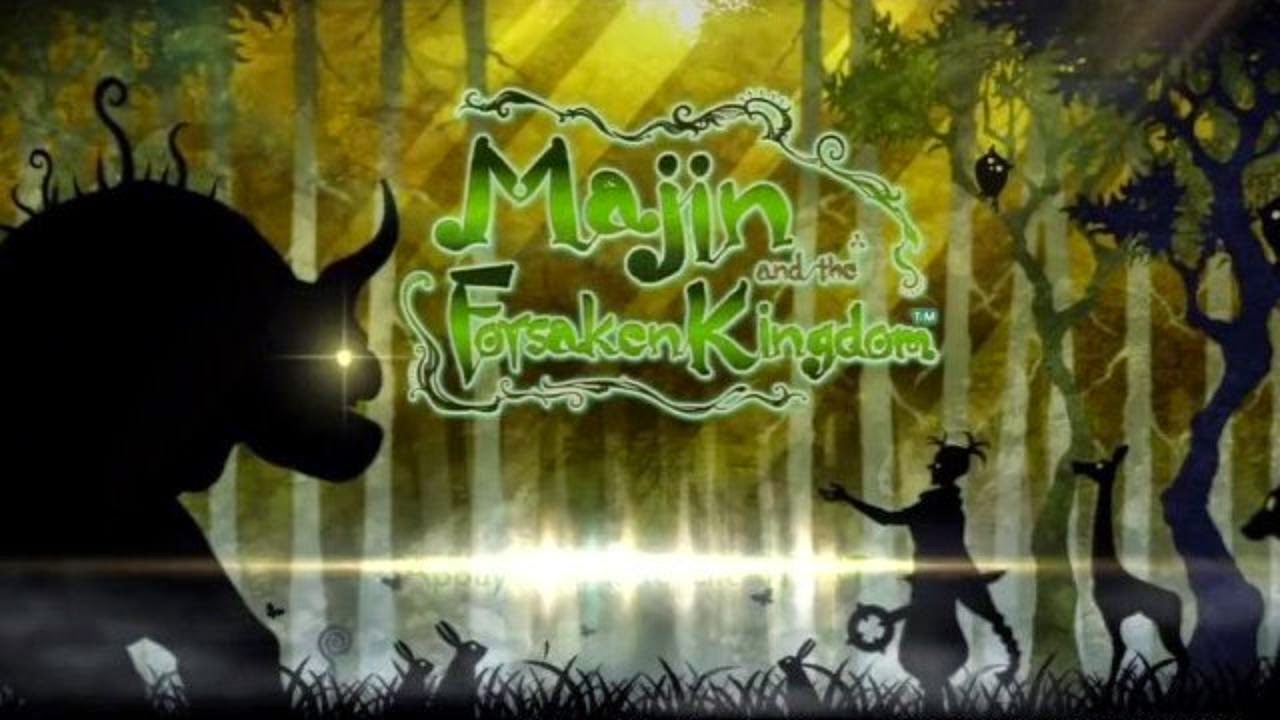 The games story & setting are set within a once prosperous kingdom that has been gradually overtaken by a mysterious 'Darkness', causing the world and its populace to decay. You play as Tepeu, a young thief who sets out to infiltrate an ancient castle and free the mythical 'Majin'. The Majin is an incredibly powerful mythical beast that you find trapped within the castle. Upon freeing him and escaping the castle, you agree to help reclaim his lost powers and restore the land by defeating the 'Darkness'. Not too long after escaping the castle - It turns out that Tepeu can understand animals, which is why he became an orphan due to his 'gift', which leads to helpful tips from numerous animals during the game and is the reason why he is able to communicate withe the Majin. Lets talk about the Majin. The Majin, or Teotl as he calls himself, is probably the key feature within the game. While you never control him directly, you will come to rely on his numerous skills. Puzzles will more than likely be unsolvable without Teotl's help and in combat it becomes even more apparent. There is an obvious difference between the two characters and Tepeu's small size will leave you having to separate from the Majin at numerous points. At these moments you'll realise stealth is key  due to most of the duo's strength in engagements coming from the Majin. The main way for you to boost the Majin's power is to collect fruits. Red ones boost strength & Green ones boost stamina. There are also mini berry's you feed him to regain health, Tepeu's health is regenerated by the Majin, while Teotl's main powers (Wind, Electricity etc) are also stored within large, distinct, berry's hidden beyond puzzles & enemies. Tepeu also levels up increasing his capability's, but its never anything on the same scale as the Majin's. A good way to boost stats as Tepeu though is to seek and find treasure chests. These either contain orbs (used to level up) or occasionally will have an item of clothing for you to collect. Different clothes boost different abilities and can be switched out at save points, also changing your characters appearance. These tend to be hidden beyond puzzles too but are usually easy to get once the Majin gains more abilities. 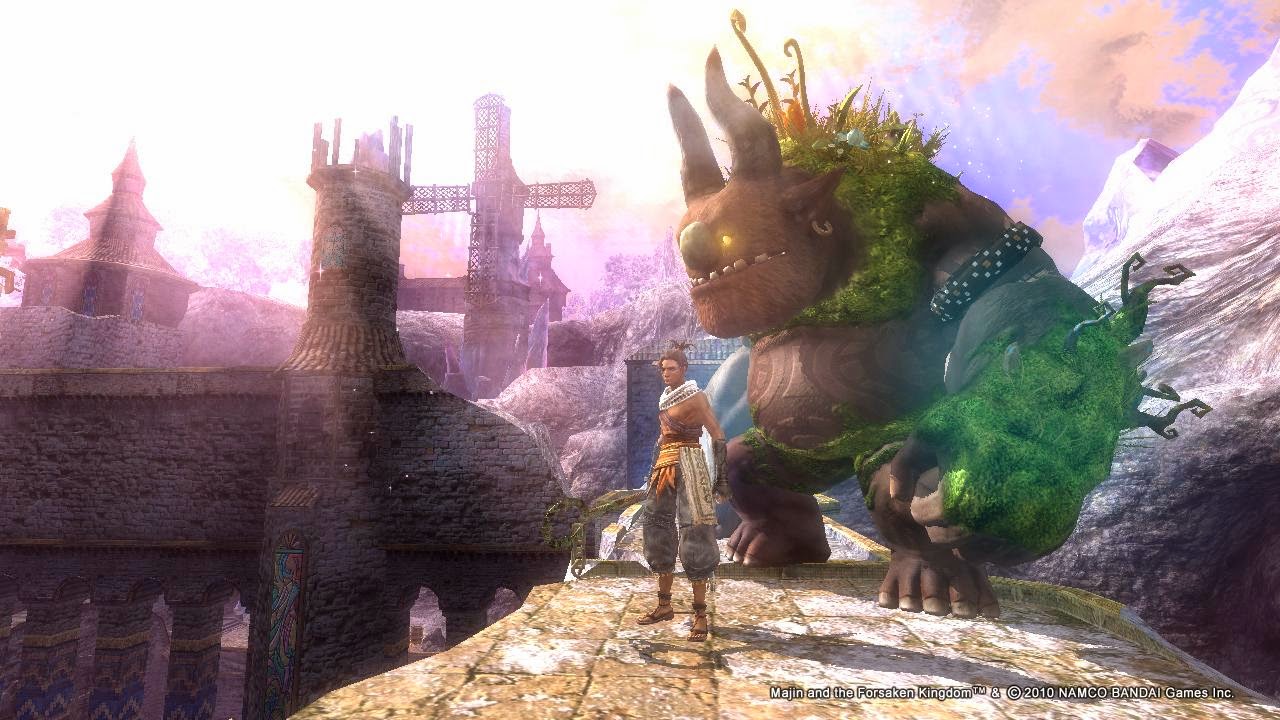 The kingdom you explore is fairly vast but not as open as you hope to be truthful. Most areas are locked away behind 'seals' which you have to defeat a boss to open for the most part too when you first venture out. Other areas are added to the world map, increasing its size and bringing a different look to the game. Progress is fairly linear in this regard, the game also doesn't seem to do a good job of explaining your objectives sometimes, and once your goal is completed you'll usually face my biggest gripe with the game - Backtracking. A lot. The games world isn't big enough to warrant a fast-travel system like an RPG, Instead using 'transport rooms' that allow you to teleport to certain areas in the map ( theres 8 portals altogether). The backtracking though appears to happen EVERY time you complete a task and the portals do not take you near your current objective most of the time, so you'll still backtrack a lot from them too. It comes across as blatant padding to me If I'm honest. Granted, sometimes you'll pass through a previous area and be able to access a previously unreachable treasure chest, but for the most part that doesn't happen. The game also lacks an objective menu, leaving you to be 'lost' at times. A couple of times no indication has been given on where I'm to proceed next, leaving me to ponder for a few minutes and resort to a walkthrough to get my bearings. Its understandable why they've foregone onscreen objective markers and the like, but replacing it with a system (the map sometimes pops up circling where you need to go next) that doesn't always work isn't the way to go. A map is always accessible but your objective is not always on it. While these aren't game breaking by any means, its something for you to be mindful of. Everything else the game seems to handle fairly well. A day/night cycle is also included, offering a few new adversaries at night and memory shards to collect to piece together the Majins story. Its story in particular, while at times predictable and never truly expanded to a degree, is interesting enough to enjoy and the occasional twist & turn with regards to the Majin's past may surprise you. 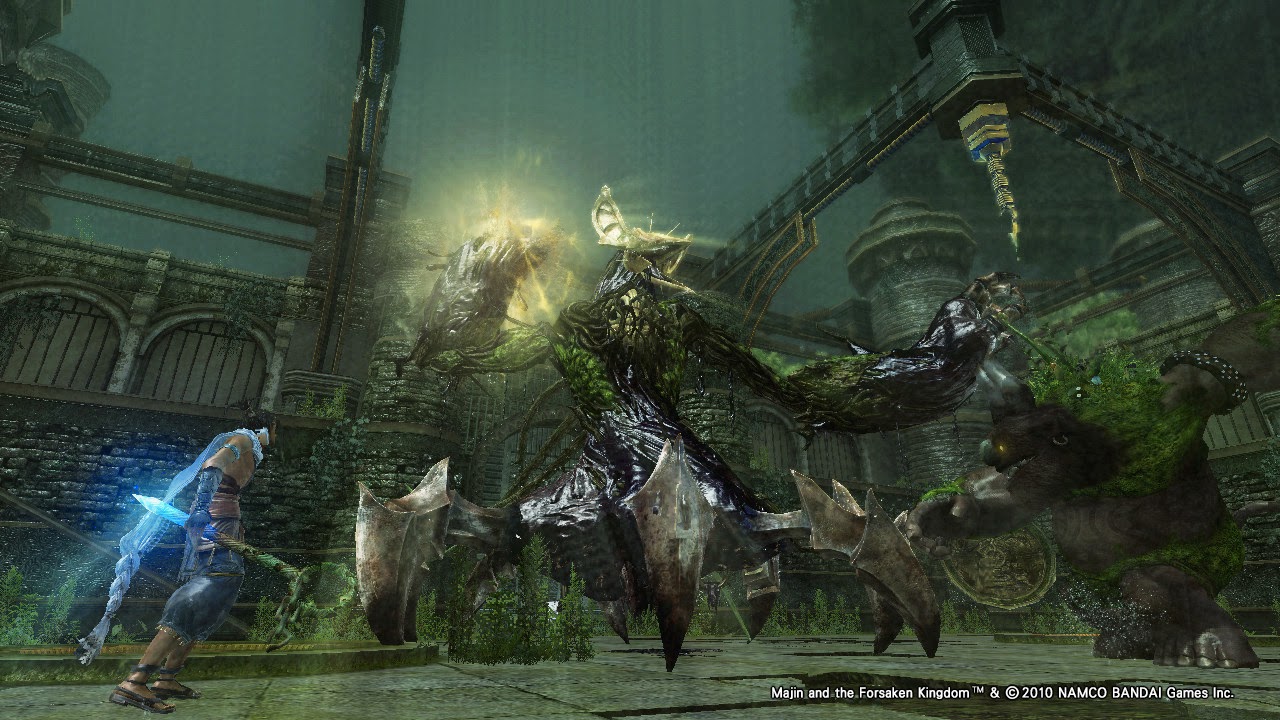 When it comes to gameplay, Majin plays like a traditional adventure game. In some ways id regard it as more of a puzzle game due to the gameplay being almost entirely orientated towards completing puzzles to further your progress. Issuing commands to Teotl can also lead to more strategic situations. At numerous points you will face strong enemies, mini-bosses if you will, that are a match at times for the Majin. IF you pause for a moment and survey your surroundings, there will always be something you can use to your advantage. A weak pillar for example can be pushed over by the Majin, crushing your enemies. At times Tepeu will be separated from Teotl and with the obvious vulnerability of having no Majin to back you up, you will often resort to stealth which relies on avoiding enemies field-of-view making takedowns from behind a necessity. Gameplay is clearly a mixture of Strategy, Adventure & Puzzle with the game managing to merge these together to form a solid game. Tepeu controls as you would expect in a traditional adventure game as the developers have chosen to ignore the fluidity apparent in series like Uncharted for a more down to earth system. This can lead to the odd clunky moment during a puzzle, but for the most part it works fine and comes across as a tad refreshing due to its more traditional roots. Controls are also well placed & clearly defined, which means most faults will be down to the player. The combat is fluid and once you've got to grips with issuing commands to the Majin on the fly, will become a doddle until you start encountering much more difficult enemies. As you'll find, Tepeu is weak in combat, doing most damage when an enemy has been knocked to the floor. After a few hits you'll be able to access a combo finishing move on the enemy by pressing 'circle' which nets you bonus XP and knocks away surrounding enemies. While Tepeu's clear weakness in combat is apparent, it does help to enforce the fact that you will need to rely on Teotl. The game does a superb job of ensuring that both characters rely of each other to get through the situations they face. Muti-tiered boss fights are a good indication of this as you'll need to rely on the strengths of both characters to prevail. While at no time do you directly control the Majin, you will feel as though he does rely on you - for more than is apparent at first. 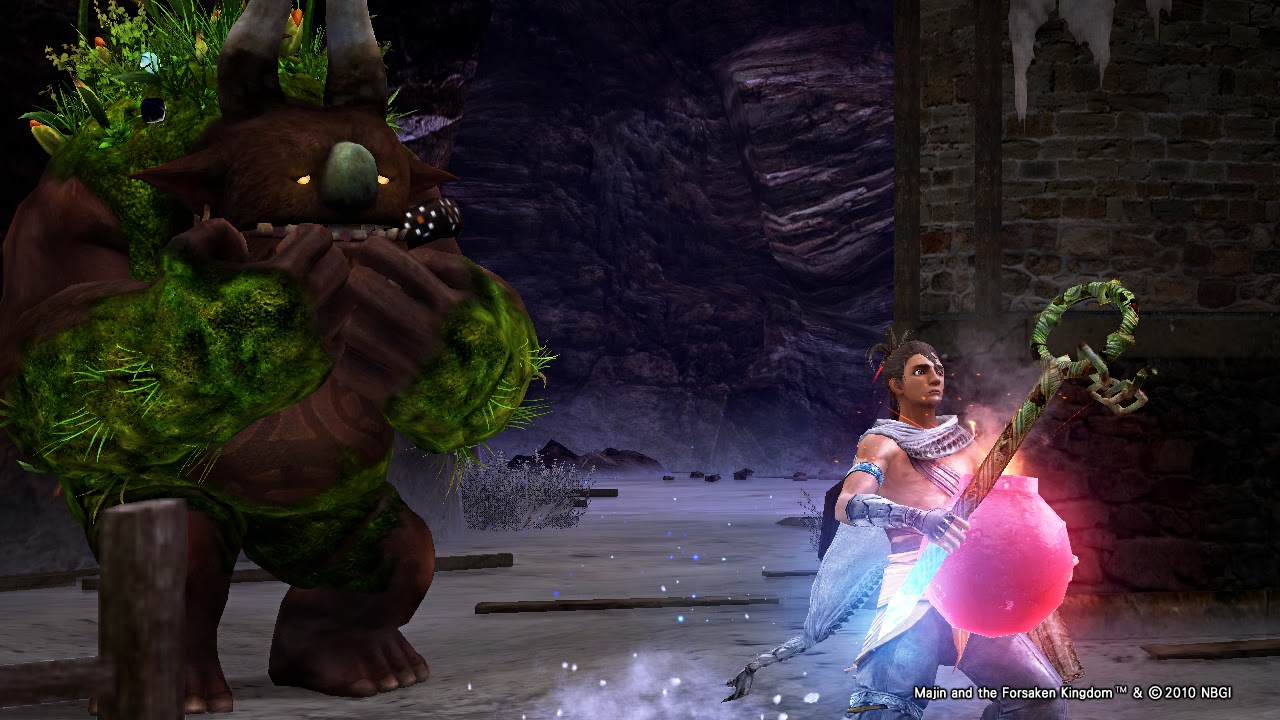 As with most niche titles out there, the graphics are not the game strongest facet. Don't get me wrong though, at times this game can be beautiful! but there are moments where its rough edges shine through. Nowhere is this more apparent than the odd shader glitch that seems to happen every so often. At times you will see an obvious lightmap glitch that shows itself as a striped pattern overlayed on the texture. It seems to appear only in certain areas,on certain walls even,so won't be seen too much. The game also doesn't seem to filter textures too well as they can appear garish sometimes at a distance. The only other aspect of the engine that is obviously rough is the pop-in for objects. while not always noticeable due to the closed areas in most places, sometimes during a stretch you'll see objects (trees, bushes, grass etc) pop-in a little closer than you'd expect considering the world isn't too open. So what about the good aspects? While the engine is a little rough around the edges, its till able to convey some beauty. While the texture filtering is a little off, the textures themselves are nicely detailed and coloured with a palette that's creates a warm & soothing atmosphere. Characters are nicely detailed and animated well enough, with the Majin occasionally stumbling and falling over adding character and believability to Teotl. Theres also nice effects in play too like the way the sun streams through clouds and tress, although others like the games use of depth of field is a little overdone blurring the distance a little too much. The real-time lighting that causes the shadows to shift as the day passes by is a nice little touch. Framerate is suitably smooth, never seeming to stutter or drop below whats expected. The game has a surprisingly good use of a sound to be honest. Voice acting can be a little wooden at times due to its budget nature, but sound effects and music are well done. The way the sound of the 'Darkness' gets louder as you approach them is a nice touch and the background music helps to add to that relaxing atmosphere the game conveys. Overall, aside from the odd blemish, the presentation is good with a nice, colourful, stylised look married to decent performance and a good use of sound. 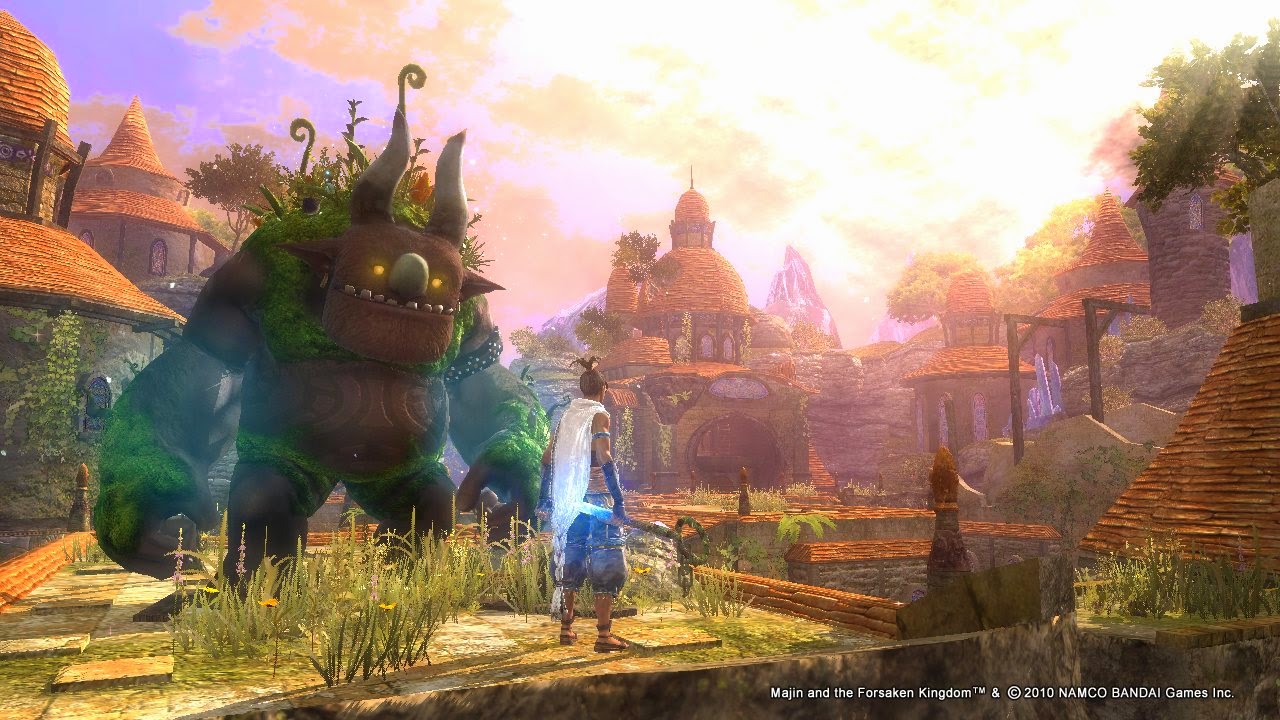 While the game does have some technical issues & the odd clunky moment, it has enough charm to supersede its issues and provide a fairly entertaining romp. The puzzle filled adventure gameplay will no doubt keep your mind ticking over and would interest those nostalgic for adventure games of yesteryear. Where the game succeeds the most is in its ability to convey the need for the characters to rely on each other. The vulnerability that sets in when you are separated from the Majin is testament to that. If you can look past its niggles & rough around the edges nature, You'll find a charming adventure that shows a symbiotic relationship can be struck up between a player & their AI partner.

Posted by Unknown at 13:09
Email ThisBlogThis!Share to TwitterShare to FacebookShare to Pinterest