When it comes to the indie sector of the games industry, quirky ideas tend to manifest on a regular basis. Recently, the release of Goat Simulator made for quite an oddity. Reputed to have been a 'Joke' release by Coffee Stain Studios, more of a tech prototype used by the developers, that saw release due to interest on social media and quickly repackaged as a game. So who's the joke on really? Lets find out!

As soon as you click to start the game, you find yourself trapped inside a not-too-small pen. There's no quick cutscene or explanation as to why the goat finds itself here, you just have to make up your own story I guess. On the right of the screen you see a list of quests. The first quest is to jump the fence which then begins the sandbox aspect of the title. The quest system though, while offering some focus, comes across as a little pointless. Any rewards offered up by the title are not really handed out by completing the quests & there's nothing beyond the level to strive to by completing them all. Yep, there is only a singular level. Which is possibly the biggest problem with the game as it shows just how lacking in content the title is. Granted, there is much to do within the level with many areas to explore, but after an hour has passed you'll have more than likely seen everything. There are unlocks available which can be acquired by finding the small golden goat statues that are hidden. Obtaining these allows you to restart with various modifiers, such as changing the goat model to a giraffe or adding a jetpack to the goat for example. Various easter eggs are scattered about the level, such as a castle where one can become the King of all Goats! or being able to acquire a move similar to Sonic the Hedgehog's spin attack. There's actually quite a bit to go and look for in that regard, but with it all being set within the same confined level that isn't too big in truth, it won't take long before things begin to grate. Luckily, the developers have decided to allow 'Steam Workshop' access, which means that community created mods & items will be usable in the title that should inject a little longevity. Coffee Stain Studios plan to release a free expansion and patch to the game in mid-May 2014, which will add new goat models, a new map to explore, and will add in local multiplayer via split-screen. That's if anyone's still playing by then. While the addition of mods & promise of expansions sound good, once you scratch the surface and find a woeful lack of content within the base software, it won't take long for you to switch off. There's probably an hour or so of genuine fun here as you chuckle at the bugs & glitches, which the developer promises not to patch, but in the end theres just not enough content at all to keep one engaged. 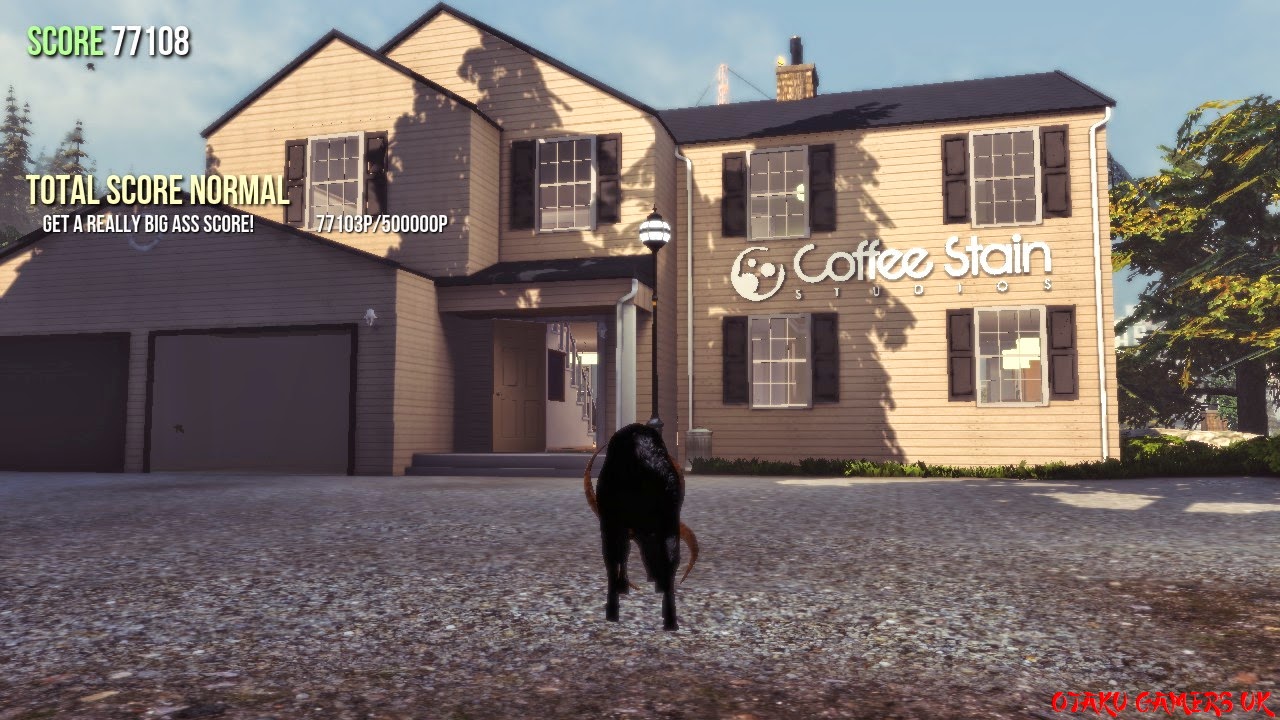 Goat Simulator sets itself up as an open world third-person title which has you controlling a goat. Your free to explore the level as you see fit, and jump, run, bash things, and lick objects with practically everything within the area. At any time,you can drop the goat into a ragdoll model or make the game run in slow-motion to show off your latest physics based destruction in all its glory. The first hour on the game is fun. Ill admit that - But it doesn't take long for everything to start to wane considerably. Every aspect of the gameplay comes across as a little rushed & tacked on, which is a shame as there was some potential here. Its a shame too that the actual control for the Goat is so clunky, even when using an X360 controller, that trying to nail a perfect jump  or landing etc can be frustrating. The layout of the controls is fine, the game doesn't seem to use many buttons, but the way it feels shows just how little the software has been developed. The title, amusingly, features a scoring system similar to games like Tony Hawk's Pro Skater, whereby doing tricks or other actions earns points and chaining such tricks builds a combo. The scoring system is another addition that seems pointless alongside the quests as again there's little to no reward. A number of environmental aspects come into play that allows you to use objects for extra stunts like bouncing off trampolines or destroying cars etc. Again, all of this has little bearing on anything - and that's the biggest problem. The calls of 'Dumb fun' from parts of the mainstream press should be taken with a pinch of salt as games that genuinely are that way (recently EDF & Yaiba spring to mind) are slated while this gets a free pass for being amusing for an hour. The fact this is marketed as a game is, frankly, insulting. Once you peel away the superfluous 'gameplay' additions you'll find exactly what this title is - A physics prototype tech demo and nothing more. 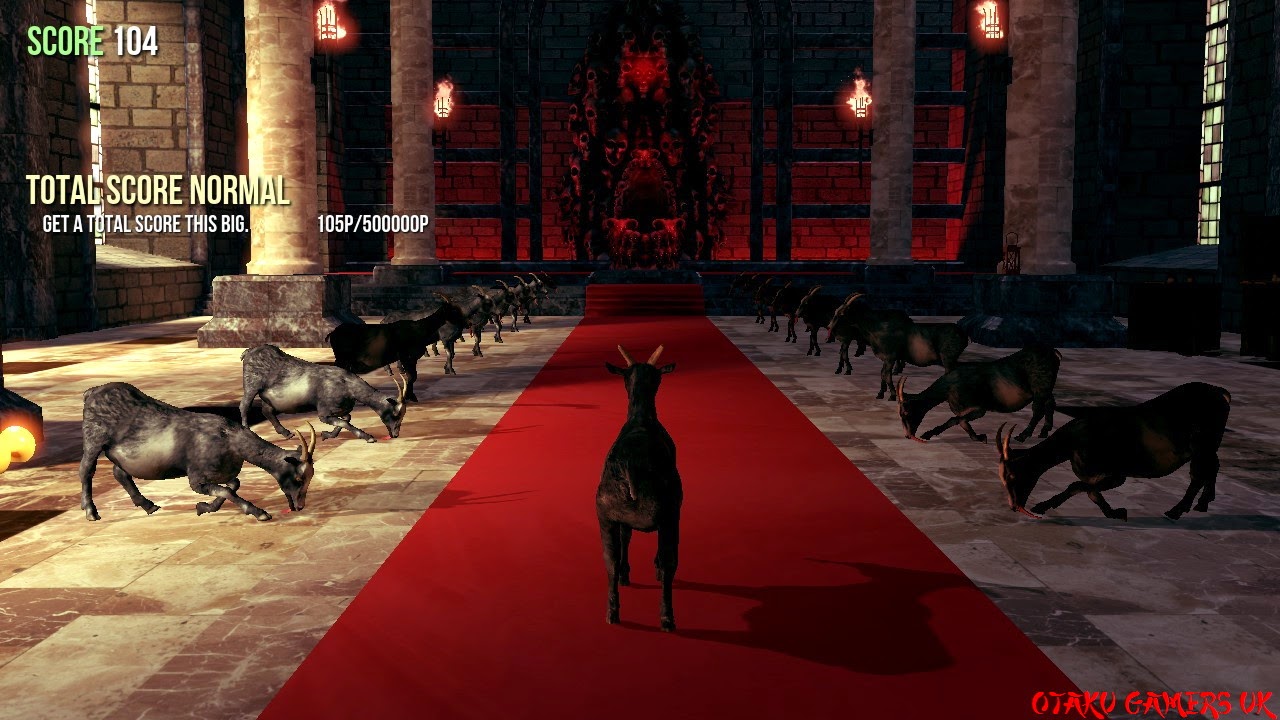 Graphically, the game is somewhat a mixed bag. Thankfully there are numerous settings to tweak away with in the options that should allow most set-ups to play the game with relative ease (I was able to play the game maxed at 1360x768 on a 6670 with a smooth framerate that only suffered minor drops with heavy use of physics in play) How well the game runs is mainly dependant on how your sandbox experience goes. With the title being basically a physics prototype, almost everything is destructible in some way and going overboard with this can cause issues. As promised, all the quirky bugs & glitches are present to goof around with and seem to be the main drive behind the games appeal. Thankfully the developers have worked hard on squashing bugs that may cause software instability or crashes, so in that way the developers have done good. Like I said though, its a mixed bag. The graphics as a whole aren't too taxing with even the main character model of the Goat lacking in fine detail. The animation set for the Goat is also wonky, seemingly non-existent at times as the physics take over. Id say the presentation of the title is seemingly the aspect most worked on. Its not bad & its not great, but it at least gets the job done 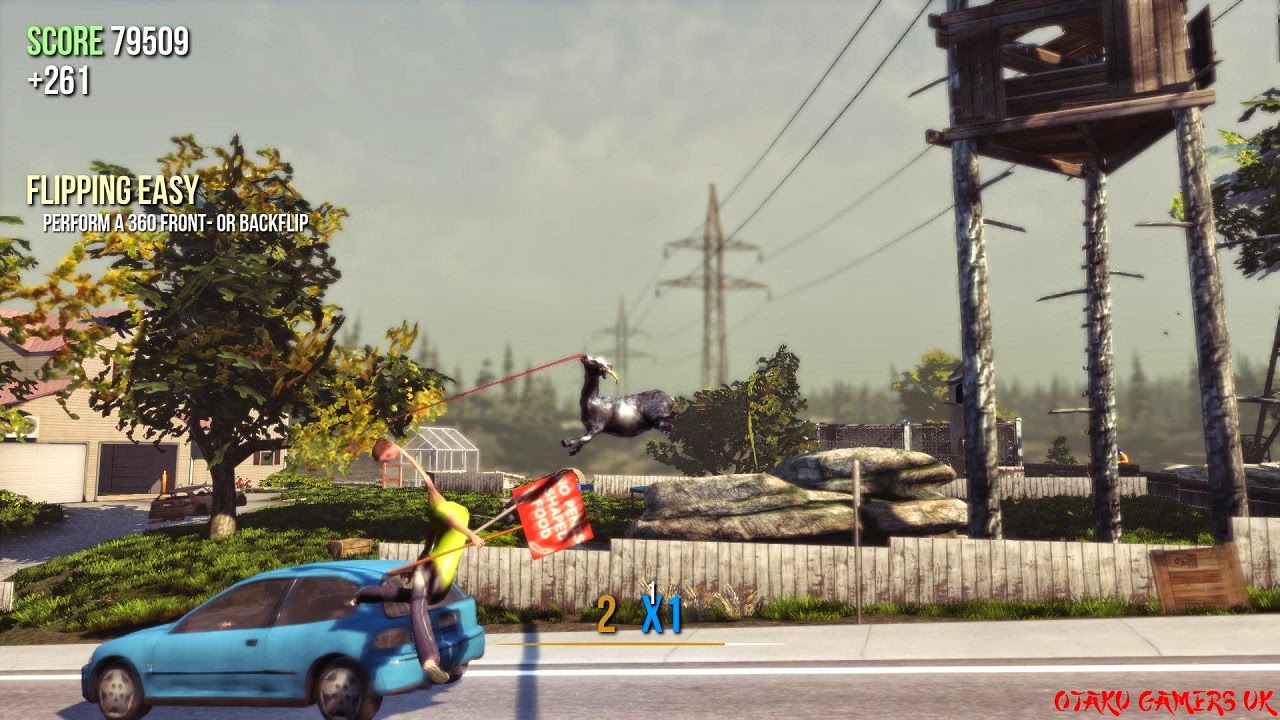 While there are some redeeming features that show an inclining of gameplay structure, collectibles to seek out to unlock rewards for example, almost everything else has seemingly been tacked on to give the illusion that you are playing a game. The truth is - You've just paid for physics prototype demo. Even with Steam Workshop enabled, theres so little content it might as well be a demo as the singular level quickly becomes a bore. After an hour or so has passed, the fun will seemingly dissipate quicker than a goats fart on a summer breeze. If you still want to purchase, thats your choice - but at least go in with tempered expectations.

Who Should buy this?
Who should avoid?

Posted by Unknown at 20:25
Email ThisBlogThis!Share to TwitterShare to FacebookShare to Pinterest