Ever wanted to carry out everyday jobs whilst sitting in a mech wandering around a victorian steampunk work? Well, today is your lucky day!
Steambot Chronicles is a strange little title. It manages to combine heavy mechs into a very cutesy world and it does work but you cannot over look the incredibly clunky controls. 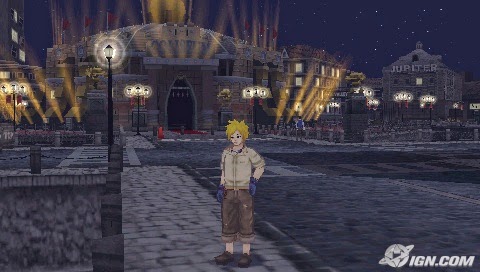 It is a spin off of a title which first appeared on the PS2 and you find yourself on the docks of Orion City in a heavy mech (called a Trot) looking to enter a tournament. The main protagonist seems completely lost and to be honest I do not blame him or her (you get to choose your gender). This is the first flaw of the game; the story did not turn up when the game was in development. Even though it is lacking in the story department it makes it up in the voice acting. There are a lot of situations where full voice acting is used and the localisation is very amusing. All the characters voice actors are a mix between an american and a cockney. It may sound a tad bit strange but it is hilarious. The first encounter is a rough thug who is insulting your future mechanic and the chatter between everyone is pure comedy.

From here you are only given one advancement in the story and that is that you need a lot of money and fame to get into the tournament. To achieve this you need to carry out jobs for the lovely towns folk and this is the main core of the gameplay. 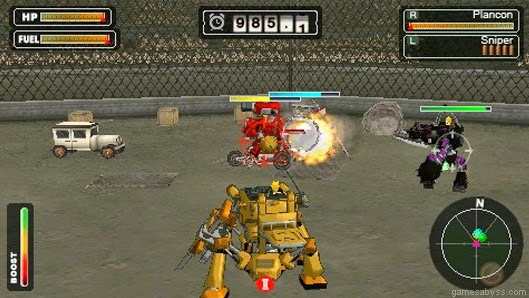 With there being little story in this title you'd expect a solid gameplay. Well not in this case. The jobs you have to complete are very simple but become repetitive rather quickly. When it comes down to it there are only really two job types; fetch quests and interviews but you need to do them. The worst part of the jobs is whole process of the things. First you need to go to the job agency and accept one job only (seriously). From here you would think you could just go and carry the job out, but no, you need to go to visit the person who set the job request up originally. From here you may need to go upgrade your trot and then you can go and complete your task. Very tedious stuff and the worse part is that sometimes you have to get out of your trot to complete certain tasks and there are only so many spots you can do this. Your fame moves up in ranks and when you have enough fame points and money you may enter the tournament of your level. Once one, you move up a rank all the way up to Rank A in which you will face the final boss. As you move through the ranks, more jobs start appearing in the agency but again, they are just the same as previous ones. With the only goal of the game to defeat the final boss, it is hard to keep at it.

This repetitiveness is not helped by the games very poor controls. Whilst in the trot moving around the world it is not too noticeable until but when you enter a battle it becomes a bit messy. There is a locking system but it is assigned to the d pad so you would have to take your hands of the analog to activate it. Even with this system on it feels like a very awkward dance when it comes to the battle. You can equip your trot with different weapons on each arm and if you equip the same on each arm you can carry out a special attack. Even though enemies have weaknesses it is just easier to hit them until they explode. It tries to be tactical but fails as you can easily overpower your trot. When you have to get out of the trot to move about, this experience is the most painful. You jog around at a very slow place and it feels like it takes a lifetime to get to where you need to go. At least in the trot pressing X makes you move faster but here you can do nothing other than run forward. It is something you have to experience to understand the pain. 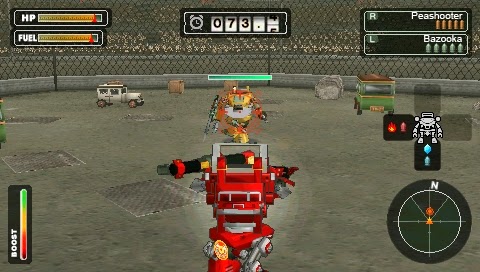 One upside to the game is the customisation. There is not a great deal on offer but it done very well. You can make your trot your own by swapping parts, upgrading parts, changing in the colours and even creating a crest. Parts can be changed either to make your trot stronger or help you out whilst carrying out jobs for the locals. As you might have guessed, parts are not free. Each part has a cost to it but the jobs you carry out always give you money and the tournament entry fees are not too high so in no time you will have enough money to create a beautifully over powered trot. The one feature which really amazed me was the crest editor. It is like a built in version of MS Paint, where you can edit every pixel to make you personal masterpiece. The only limit is really your imagination 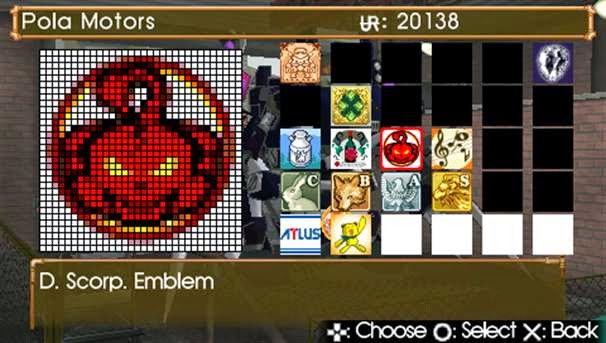 This is where the game shows it’s true colours to whom it is really aimed for. The game is presented in a cute cell shaded style with crudely drawn 2D cutscenes. These scenes are not animated but rather a character on screen with a text box below with all the dialog in. In all honesty, if it was not for the key scenes having voice overs I am sure the player would not even bother reading what was going on. It does not help that is has a poor story, but when the content is delivered like this it really is not helping itself.

As an older gamer it held my interest for the 8 hours it took to finish, but after that I will not being going back to it as there is no replay value present. Flaws aside, what we have here is an open world game aimed at a younger age group. The story is short and simple, the characters are amusing, the quests are even simpler and the battles are very straight forward. Yes, the few flaws present can hinder the gameplay but to a younger player they may overlook them and just have good fun. Heck, is this what we should be doing whilst enjoying games?

Who Shouldn’t Play This?

6/10
Posted by Unknown at 20:28
Email ThisBlogThis!Share to TwitterShare to FacebookShare to Pinterest