First things first. Lets deal with the elephant in the room that is no doubt leaving you to ponder on the validity of this review by myself. Yes, I adore Hatsune Miku. The music is awesome, Live shows are a treat & the PsP Project Diva games were brilliant on the go. No, I do not own a life-size huggable Miku pillow before you ask! So why would you take notice of this review? Simple, Project Diva F is a game. Sure it has Hatsune Miku in the name and also in the game but at the end of the day I'm reviewing the game itself, not the Hatsune Miku content. You still reading on? Good! Lets begin! 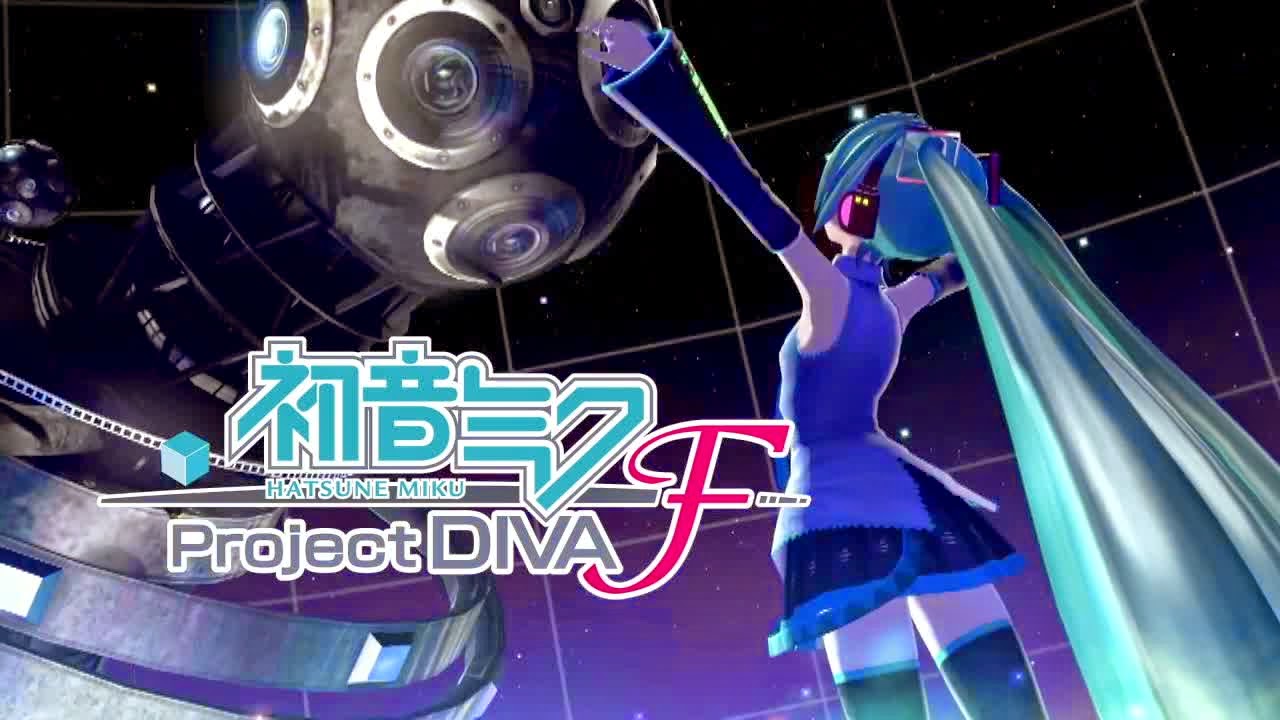 The Game features a total of 44 songs, Including DLC. From what Ive gathered almost all of these are new for the Project Diva series and to be honest about a 1/4 of them I ha vent even heard myself, so anyone coming from the PsP games will be happy to see not much reused content here. Then again, I do miss some of the songs available on the handheld versions but there is a neat feature of the game that will no doubt be a good workaround which Ill allude to later. Each song has 4 difficulty settings (Easy, Normal, Hard, Extreme) and when a song is completed, points are awarded that can be used to buy content. This content includes costumes (or modules as known in-game) which there are 84 in total when all the Vocaloids are combined (Miku, Luka, Rin, Len, Kaito, and Meiko) plus theres gifts and content to buy for the Diva room. I'm glad to see the Diva room has been kept in the game and also expanded a little over the previous PsP releases. The Diva room allows you to interact with the Vocaloids and build up 'affection' with them which in turn allows mini games or events to be played out. For example I spent a couple of minutes poking Miku in the back of her head upon which she became angry. I gave her a Tambourine to calm her down n build affection which in turn led to an event cutscene whereby Meiko entered the room n proceeded to do a duet dance with Miku while playing the Tambourine. There are also objects to decorate the room with and the room itself can have its style changed by purchasing with points. I must point out tho that everything must first be unlocked by completing songs. Complete a song on Easy - unlock content. Complete same song on Normal - unlocks more content n so on with all 44 songs. Indeed, each song will need to be cleared 4 times to unlock ALL content. Moving on to a surprisingly interesting feature Id alluded to earlier concerning missing songs. 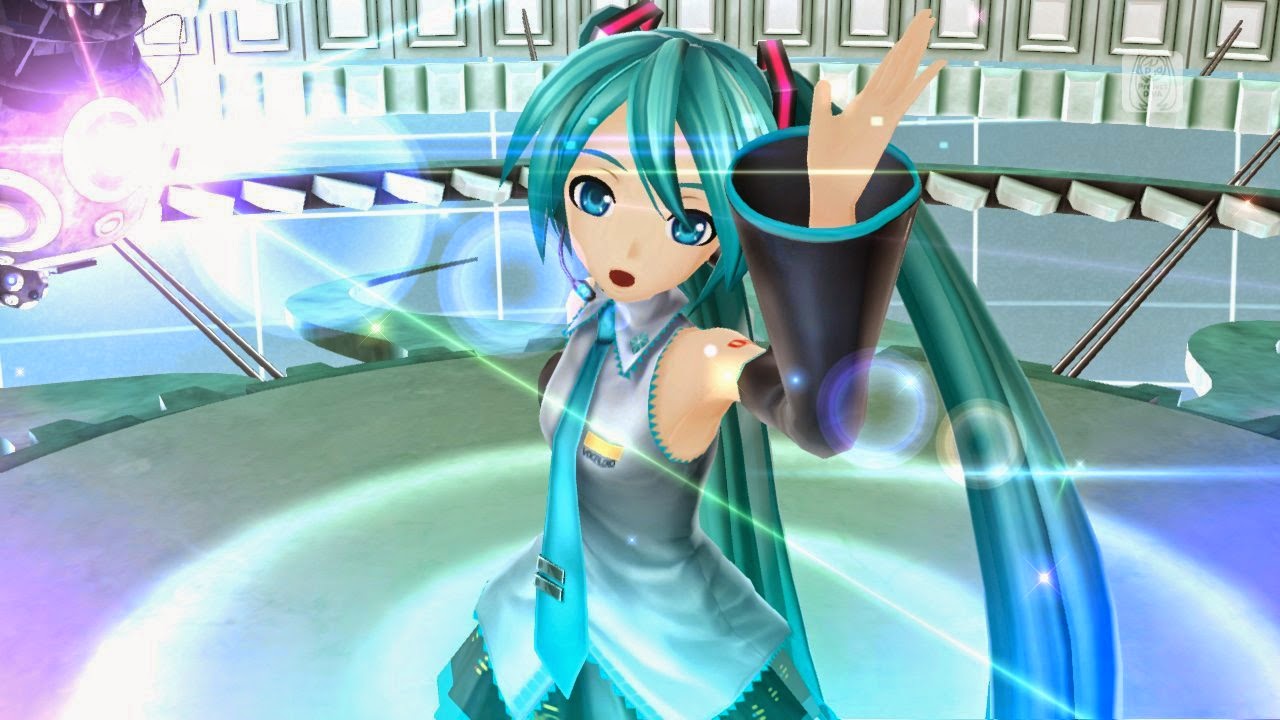 There is an Edit area of the game that allows you to create your own Videos and also your own song stages using your own Mp3's. Yes, You can have Miku getting her groove on to Vanilla Ice if you so desire. Your creation can then be shared online via the Network section of the menu! A brilliant inclusion, but also where my first issue with the game is raised. If you share your creation, only the video and song stage is shared. The Mp3 does not get uploaded too (for obvious reasons like copyright I guess) What happens is that when you load the downloaded edit data you'll be asked to import an Mp3. Yes, you have to have the Mp3 on your Ps3 to import. When I downloaded one for PoPiPo luckily I have the Mp3 so I was able to get it to work and its a really good feature when it all comes together, but a little fiddly otherwise. There is also a Studio option that allows for you to upload pictures and then generate one of the vocaloid to position within the picture before saving it. I'm not sure how much use this will get outside of Vocaloid fans. Also a Live stage mode which allows you to watch live performances using the in-game engine. Again, not sure how much use this one will get. Finally there is of course stat-tracking but this raises another somewhat minor issue. There is no online leaderboards, so if your the type of person who just has to be better than John Smith from Nepal at games then its omission may leave you disappointed. I think that's everything covered. As you can see there is quite a lot of content here for a rhythm game which would take a LONG time to finish, if you was going for that 100%/Platinum 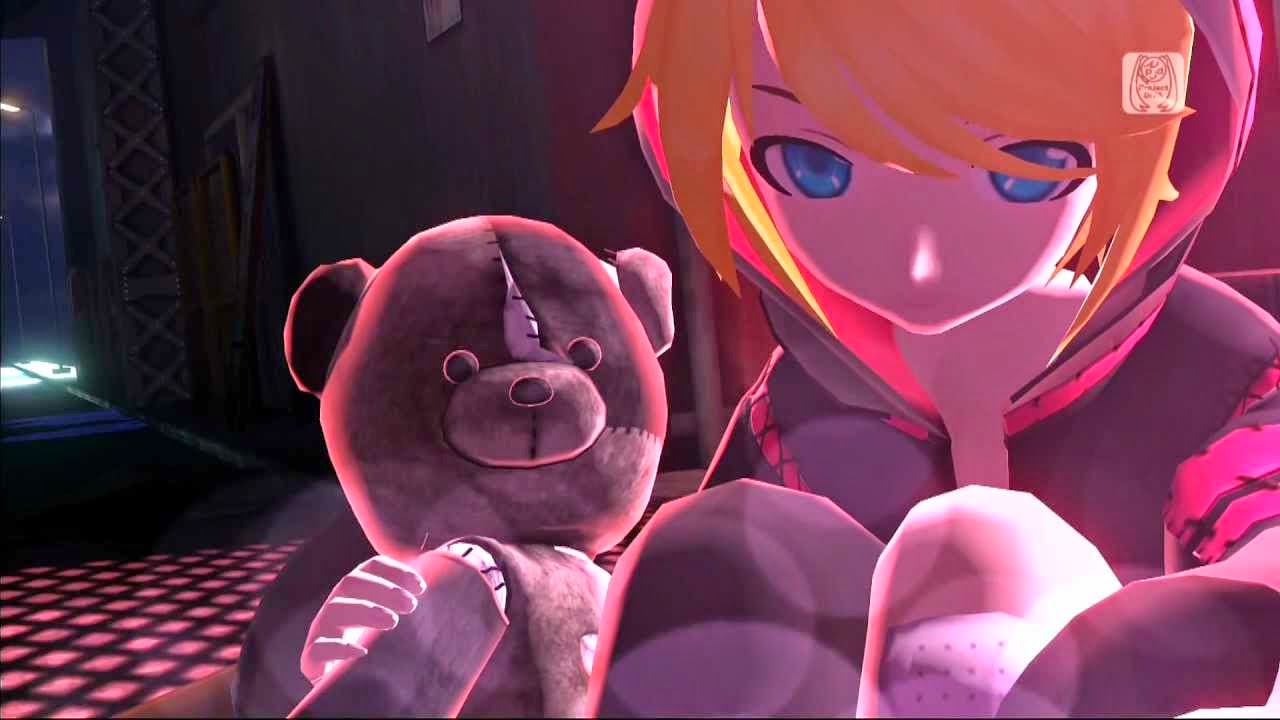 The game retains many of the staples of its gameplay from the previous PsP iterations. Anyone coming from those releases will feel right at home. For everyone else, You'll be dropping into a superbly refined rhythm game that's easy to pick up but devilish when the difficulty its ramped up. Basically, as with all rhythm games, the face buttons are pressed in time with the music to yield points. On Easy only the Circle button is used (also the analogue, more on that later) which is a perfect starting point for anyone new to the game. Up the difficulty and this is where Project Diva really comes into its own. On Normal not only is another face button added but another symbol is then used in-game, an arrow coloured the same way as the face button. With this you have to press the face button and the corresponding D-pad direction - ie Square+Left for an arrow the same colour as the square button facing left. The jump up to Normal takes a little getting used to, especially if you have just finished Easy, but the Jump to Hard isn't too bad once you've cleared Normal. Its the same but just uses all the buttons (except LI,R1,L2,R2) I have yet to try Extreme but if the PsP versions are any indication, Ill be sobbing in the corner after 30 seconds. With this being a new release there are a few changes to the old formula. The most notable is the 'Star' symbol which requires a flick of the analogue although these tend to usually only show during the new 'Technical Zone' portion of a song. The Technical Zone is another new addition whereby you have to maintain an uninterrupted combo within a time limit for bonus points. Another change comes with the 'Chance Time'. While bonus points are still awarded during this segment like in previous releases, A star in the corner will also fill up ( 'Cool' will fill the star quicker than 'good') which when filled will enable a singular rainbow star to appear at a later interval in the song. Hit this Star and not only will you get a nice boost to your points but also a bonus event will happen during the song. Now on to the gritty stuff. Ive only come across a couple of issues with concerns to gameplay. The first is the new 'Star's that requires the use of the analogue. With the analogue having an obvious deadzone, during fast paced sections when symbols are flying everywhere there can be the odd occasion when you have to be quick with the analogue. The deadzone can on occasion cause a quick small jab during a fast section to not register. On Project Diva's sister release on Vita, the touchscreen is used but with there being no such input for Ps3 they've had to use something different. While by no means is it a game breaker, it is something to ensure you are aware of. The other is possibly delay.  Luckily SEGA have included a delay option in the options menu for you to tweak to rid yourself of the TV delay if it rears its ugly head. In all honestly I can't really find much fault with the gameplay. Its been superbly refined from previous PsP releases of the game to almost perfection in the rhythm game stakes 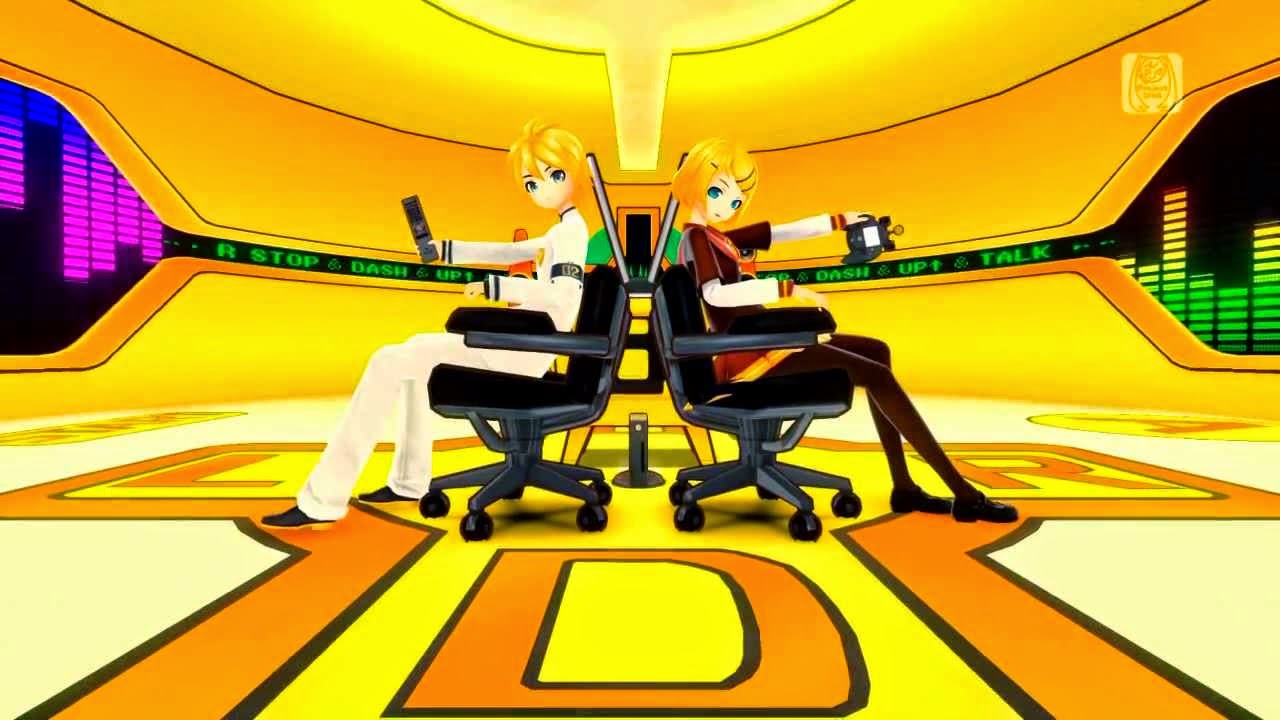 Well you'll be pleased to know that this game does in fact run at 1080p, and it shows. Scenery and characters are very well detailed and the high resolution ensures everything remains razor sharp. There is also AA employed to smooth off those jaggied edges that may crop up on the odd occasion, although there is some slight aliasing still if you go looking for it. The game is a large improvement over its predecessors due to the increase in capabilities of the Ps3/Vita. Character animations are improved with smoother movements for clothing etc (and Miku's gravity defying hair!) which leads to also better facial animations and the new real-time lighting fleshes out the visual improvements. Framerate is key and I'm happy to report 99% of the time its flawless. There was a momentary Judder during Meiko's Stay with Me when it began to snow, but it only lasted a moment and is the only time Ive noticed any slowdown. Luckily the same art style is maintained from the PsP games which is a huge bonus for me as it looks good and ensures the game is detailed, smooth and colourful. The anime stylings of the characters n levels will do nothing to endear you to the game though if you absolutely dislike that styling. There has been the odd occasion when the button icons have been lost in the colourful backgrounds though, notably during Kagamin's Hachi Hachi Flowery Battle, but it is a rare occurrence. As for sound, well its a rhythm game so as you'd expect there isn't much to go on other than to confirm that the sound quality is superb and the songs hav been encoded perfectly for this release. There is currently a bit of whining on the Internet concerning the games Dolby Digital 5.1 status. NO, the songs haven't been re-encoded into 5.1. Instead its been encoded as multitrack stereo, thereby preserving its original stereo track while utilising the other channels when needs be. For those that use a 5.1 set-up at least you know beforehand (unless you've already purchased) So while there is the odd minor issue with the games presentation, I would say SEGA have done a stellar job of transporting its PsP series to more powerful hardware. Im not too sure what can be improved for the release of Project Diva F 2nd next year though to be honest. 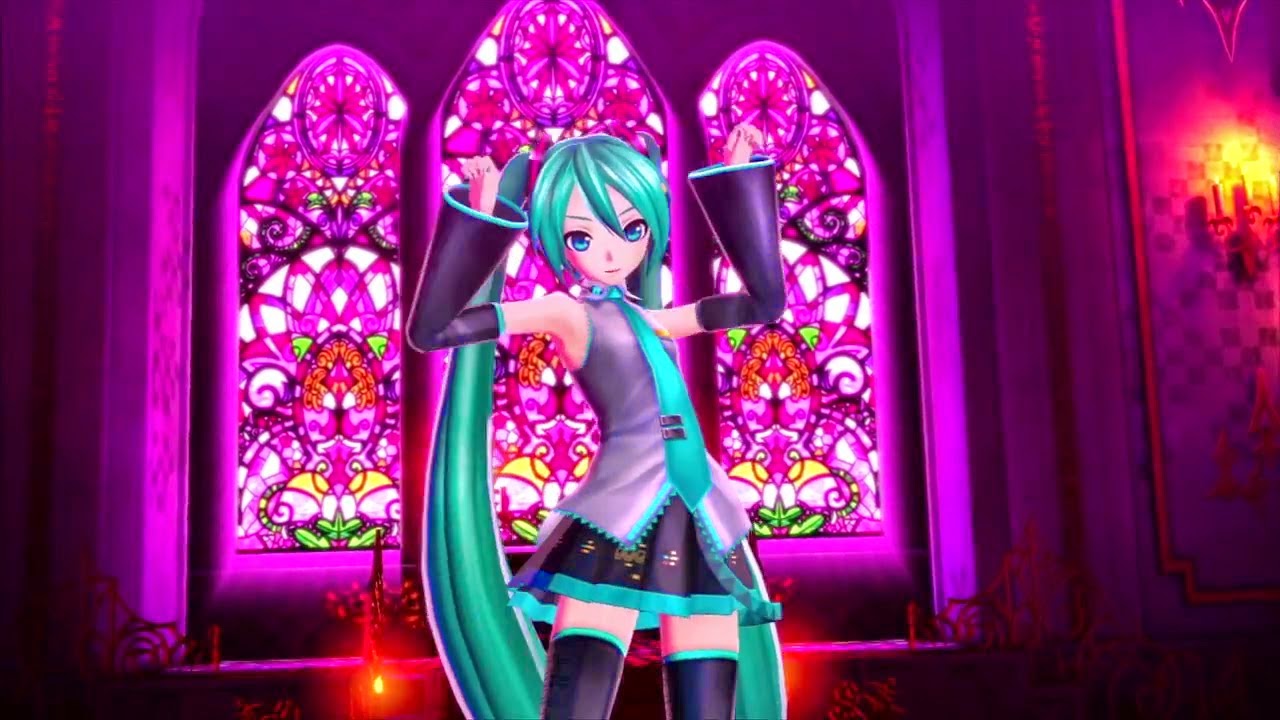 What we have here is a superb rhythm game. There is no denying that fact. While people who have no interest in Vocaloids or rhythm games will probably give this game a miss regardless, any open-minded gamer out there looking to try something new could do a lot worse then to give Project Diva F a chance. There is the odd little niggle here & there, lack of online leaderboards probably the most glaring for a console release, but the gameplay has almost been refined to perfection that anyone who endears themself to Project Diva F can have hours of enjoyment. With the game also sporting the Studio n Edit features and the ability to share data online, even more hours could be lost creating your own content or downloading others. With bags of content, Stunningly refined & addictive gameplay, smooth graphics and a great soundtrack that all adds up to a must buy for Vocaloid fans in particular. Did I mention it features Hatsune Miku!!??

Posted by Unknown at 13:56
Email ThisBlogThis!Share to TwitterShare to FacebookShare to Pinterest