Earth Defense Force 2017. A game title well known in the niche circles due to the games well recieved launch on the Xbox360 all those years ago. A surprising release followed last year on the PSVita for the game, which saw the addition of Pale Wing as being a much touted new feature. So just how was things switched up for the games portable release? Does it get tangled in the spiders web like Earth defense Force Portable 2 did on PsP? or does the bug spray do its job? Lets take a look.. 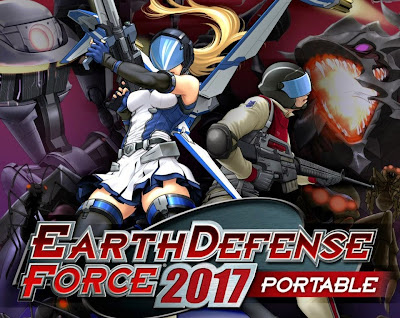 For those coming in from Earth defense Force 2017 on the Xbox360, you'll know most of the content that the game is packing. Whereas before when you would see the term 'Portable' in a game title you would instantly start to wonder as to whats been cut, here theres actually additions. Aside from it additions, the content is identical to its big brother. Except for one thing. Split-screen co-op. With the re-release coming on the Vita its understandable and the game more than makes up for its omission (more on that later) 2017 packs in a whopping 60 levels, up from the 53 in the original. These levels can be as bite-sized as a minute or two all the way to at least ten minutes. The size of the levels more than suit the portability of the handheld and for when you don't manage to finish a level before you hit your commuting stop, the sleep function of the Vita saves you having to do it all again. Still, the levels aren't too long that having to redo one would become a chore. There are 5 difficulty levels in total ranging from Easy to Inferno. The difficulty setting is somewhat key in your decisions when going back to levels as it directly effects one of the games key features. 2017 has a loot system. When enemies are killed they drop either Health, Armour (increases your total health by one point, so collect as many as you can) and the most important, Weapons! The higher the difficulty you play, the more advanced the weapons become and the higher your chance of receiving them. In total there are over 150 weapons to collect including the usual Assault rifles, Rocket launchers, Shotguns etc but also Special weapons like Flamethrowers & Sentry guns. The addictiveness of the loot system should not be underestimated. There are also numerous vehicles in some levels you can use to squat those bugs (Hover bike, Tank and Mecha suit to name a few) 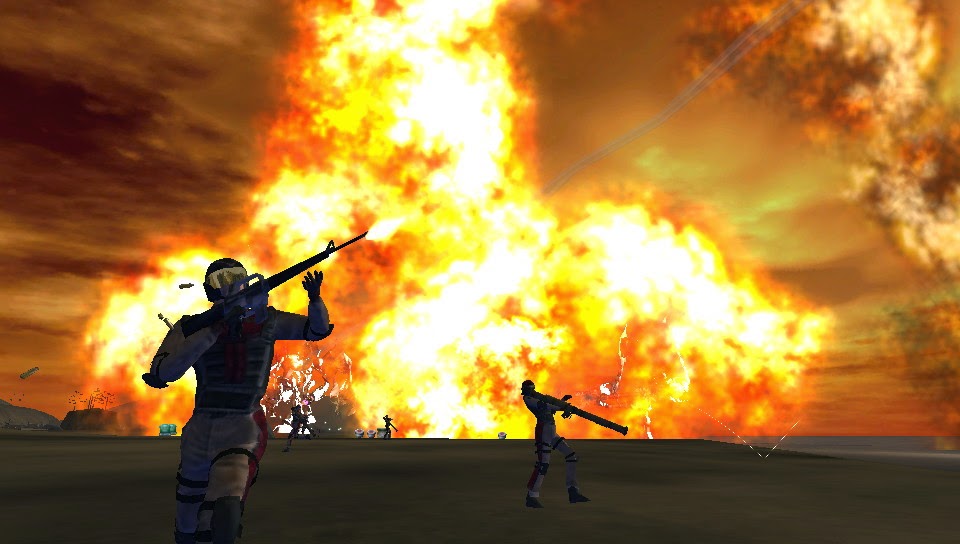 Another key addition to the game is a secondary character that is unlocked at the completion of the game. Palewing, a fan favourite from GDF on Ps2. She does away with the standard weapons and the ability to drive vehicles in favour of energy weapons and a Jetpack. Being able to scale buildings n the like with the Jetpack & the different weapons bring a different style of play to the table, effectively doubling the content for you. So whats this new addition that makes up for the lack of split-screen? You've probably guessed it, Online & local Co-op for up to 4 players. I haven't been able to try local via ad-hoc but I was able to finally find a game online. I can confirm the game is a lot of fun with 4 players. Creating a party to chat with friends while defending the earth would be a lot of fun! Unfortunately the online isn't popular it seems. Most times I check, its a ghost town. Any other negative aspects? Well there isn't much of a narrative. There are cutscenes before levels giving updates on how the war is going, but its nothing that's going to draw you into its universe. Those seeking an immersive narrative will be best looking elsewhere. Theres also the fact of whether those coming from 2017 will find there to be enough new content to buy the game again. While Palewing is a great addition, having to clear the game first might leave some disappointed. 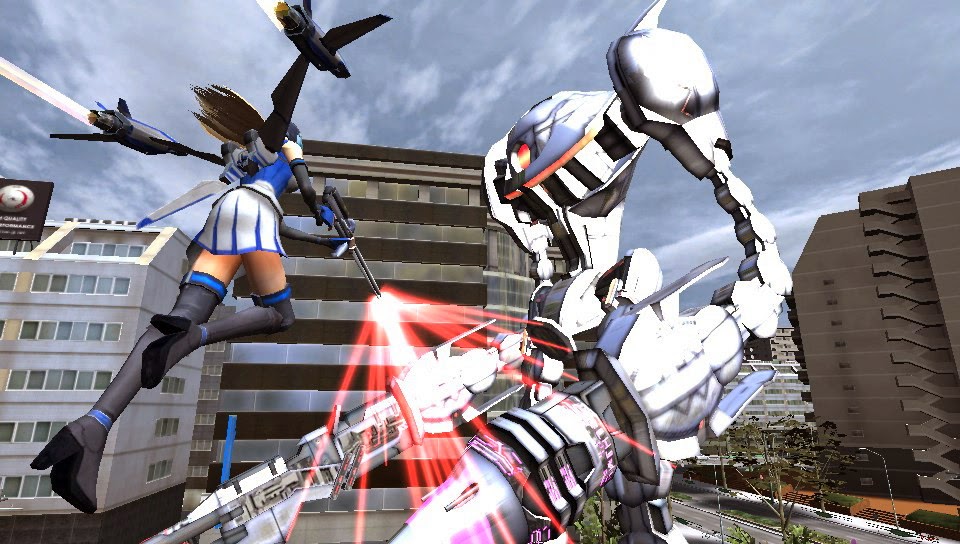 This is where the game probably shines the most.  For those unaware, EDF is a third-person shooter that has you clearing levels of alien invaders. When the alien invaders include giant ants & spiders, you know your in for a cheesy B-movie romp where gameplay is king. The gameplay fits the Vita perfectly. Dual-analogues ensure maximum carnage can be dealt. There are 2 control schemes though that offer different uses of the right analogue. The Basic scheme has the right analogue mapped for the dodge/roll with strafing on L & R with the left analogue handling movement and turning. The fire button, jump etc are all mapped to face buttons. I haven't used this set-up myself as the 'Advanced' scheme is the one that offers up your typical shooter controls we all know. The only issue with this scheme is Dodge & Jump are both mapped to L. While not a game killing issue, jumping instead of dodging when there's a swarm of bugs after munching you can  lead to the odd moment of frustration. Aside from that one minor control issue, everything else works fine. Levels consist of mainly clearing the area of the city you are currently in of bugs. While this doesn't sound too much fun, it all comes together one the game is fired up. The amount of carnage in each level will easily keep you engaged with hundreds of bugs clambering over each other, and over/around buildings too, to take you down. Your weapons too are gloriously overpowered and the sight of a dozen ants spinning through the air from a single rocket blast will leave a grin on your face. There are also ridiculous boss enemies like a fire-breathing armour clad Godzilla style beast to bring down! Destructible environments also help to give the game a sandbox battlefield feel to it as you can reduce the area to piles of rubble or use the buildings to funnel the enemy forces to suit your needs. Loot drops though will keep you in the thick of the action though once you become addicted to collecting them. The core gameplay is satisfying and its shooting mechanics are spot on. This game is a prime example of how getting the basics right makes all the difference when it comes to gameplay. Any other issues though? Not that I can think of. Like I said, the basics are spot on so it makes it difficult to see any real faults with the gameplay. The odd control issue with the 'Advanced' scheme being a minor blemish (Dodge could've been put as a swipe on the rear-touchpad) I suppose it could become repetitive if you don't endear yourself to it or find the old-school arcade style action as fun as other 3rd person shooters we have nowadays. Those that loved 2017 on the Xbox360 will adore this version as it plays exactly the same, but portable. 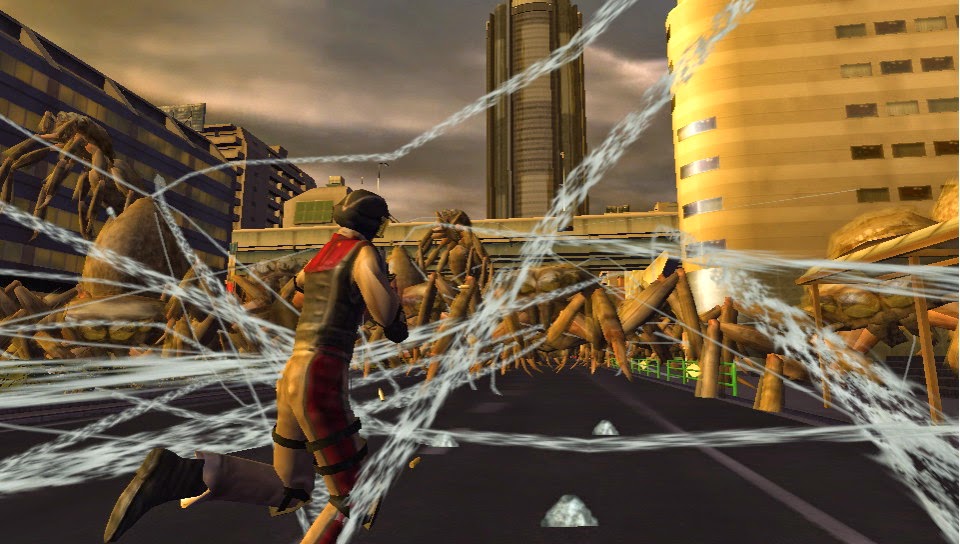 The graphics are the lowest point of the game. They show the budget nature of the title more than anything else. Compared to the 360 version, most aspects are toned down a little which is obvious when given the mobile nature of the hardware. Textures feature less detail with filtering being toned down a little. Enemy character models seem to be on par, but feature less detailed texture work and the animations are the same,although at a certain distance animations are halved to save processor cycles. This can be forgiven a little when the sight of 30+ enemies are on screen at once. One plus point would be that the game appears to be running at the Vita's native resolution. Everything looks sharp & crisp, a little AA would've been nice though. Framerate isn't as bad as the 360 version either, but frame drops still occur. It never reduces itself to a crawl that ruins the gameplay like EDF Portable 2 on PsP, but it does happen still and it needs to be mentioned. The sound aspect isn't too bad depending on your view of budget games. The music is suitable with a fairly memorable title tune you'd recognise again if you heard it outside of the game. The voice work is laughably cheesy. Some would call it bad, but I think it fits the theme of the game well. Everything here all adds up to what some would consider to be worthy of skipping the game completely. Me? I think it all adds to the B-movie charm of the game. The game isn't intending to try and compete with the big hitters on Vita so if your looking for something to show off your Vita with, this is definitely not that game! 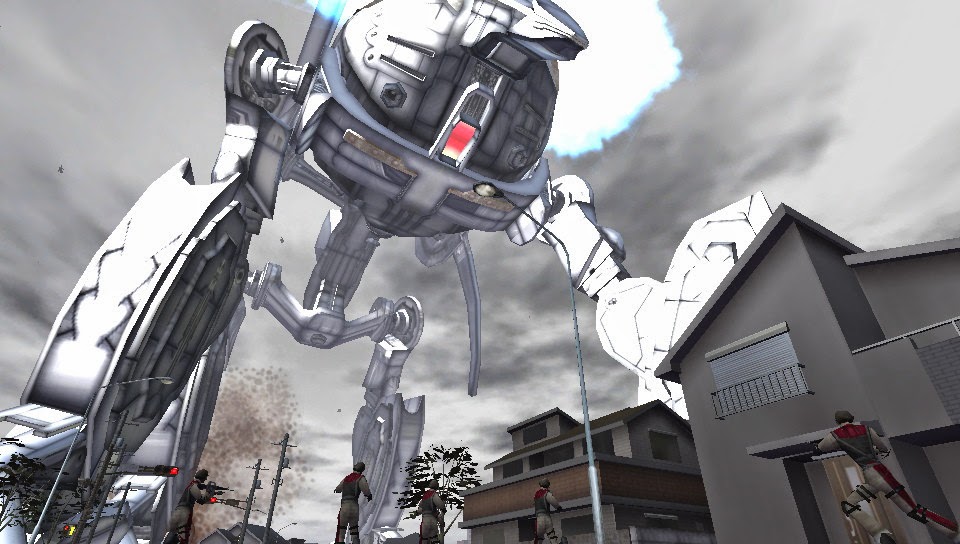 While the game does little to belie its budget nature, practically revelling in its B-movie charm, Its the prime example of a gamers game. Gameplay is king and with Sandlot having made sure the most basic mechanics of gameplay are well developed, a lot of fun can be had by anyone who gives it a chance.  The secondary character, Palewing, doubles the content and is a great bonus for those that have played the original due to her different play style. Will it appeal to everyone? No. Its budget nature ensures a niche audience but for those looking for pure gameplay goodness, There aren't many games on Vita that betters it for pure blasting fun. Take a chance and I guarantee you'll be chanting 'EDF EDF EDF' or shouting 'Come on you apes. You wanna live forever!' in your best Micheal Ironside impression before the war is won.

Posted by Unknown at 18:18
Email ThisBlogThis!Share to TwitterShare to FacebookShare to Pinterest