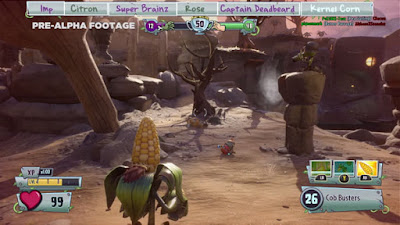 This is a little outside what we normally report about but this is a game that I am really excited for.  Plants vs. Zombies: Garden Warfare 2 is the sequel to the highly popular multiplayer 3rd person shooter, Garden Warfare.

In addition to extra modes and new single player options, six new classes have been announced.  Up until now very little was known about them but in a recent developers diary, new details have been released;

These extra six classes bring the total number of classes to 14 with over 100 playable characters.

Plants vs. Zombies: Garden Warfare 2 is being released for the PS4, Xbox One, and PC in Spring 2016.

Posted by Unknown at 17:59
Email ThisBlogThis!Share to TwitterShare to FacebookShare to Pinterest