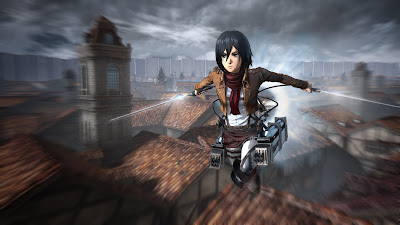 Some fresh footage has been shown of Attack on Titan at a stage show by Koei Tecmo.
The Playstation game will be following the story arc of the first season and will contain the following playable characters;

As with the series, Titan can be defeated by slicing the nape of their neck but during the fight you will be able to sever other body parts such as legs and arms.

Attack on Titan is being released on all Playstation platforms in Japan this Winter with an EU and US release set for 2016.

Posted by Unknown at 07:30
Email ThisBlogThis!Share to TwitterShare to FacebookShare to Pinterest