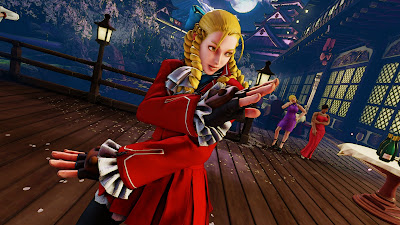 
Karin is the young heiress to the Kanzuki Zaibatsu, a global financial conglomerate that possesses vast wealth and resources. Her regal and pampered upbringing is what led to her high-maintenance attitude and razor-sharp wit. But behind her flowing golden locks lies a true martial artist obsessed with upholding her family motto, “In all things be victorious!” Karin is well versed in numerous martial arts, which she and her family combined to create a unique “Kanzuki style” of fighting.

In Street Fighter V, Karin is a well-rounded character, possessing a wide array of strikes and moves at her disposal for any situation. Utilizing her new dash move allows her to close the distance quickly between her opponents and go in for a quick high-low attack or throw.

And just when the opponent thinks they’ve figured out how to deal with the pressure, Karin’s V-Trigger completely changes up her game plan by allowing her to perform her signature Guren Ken multi-string attacks and variations. Players who enjoy attacking with speed and a large variety of tools will find Karin to be extremely satisfying to utilize.

Karin lunges forward with a devastating palm strike that dissipates projectiles and knocks down the opponent if it connects, all while helping to build her V-Trigger gauge. By holding down the buttons, players can charge the move for a split second, giving it better hit and block properties.
V-Trigger: Kanzuki-Ryu Guren No Kata

Karin channels her inner Ki to unlock the true potential of the Kanzuki fighting style, giving her access to the Guren Ken attack, which in itself possesses over half a dozen different follow ups and variations. After the initial Guren Ken, she is able to transition immediately into an overhead attack, a low sweep, a flying throw, another quick set of strikes, or even a backdash to bait out counterattacks. This gives her immense flexibility in controlling the flow of the fight, ensuring that she comes out on top.


The Capcom Fighters Network (CFN) has been confirmed as the official community destination that will be integrated into the online infrastructure of Street Fighter V. Fans and players will be able to visit CFN at any time to view player profiles, match statistics, replay videos, as well as register friends and send battle invitations. Players can quickly and easily see where the action is happening via a global “heat map” and stay up to date on the latest game news and tournament information. Additional CFN details and features will be shared in the coming months leading up to the release of Street Fighter V.

Posted by Unknown at 12:43
Email ThisBlogThis!Share to TwitterShare to FacebookShare to Pinterest