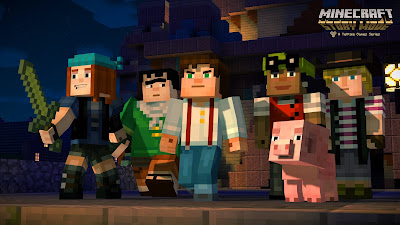 In other none TGS 2015 news today, Telltale Games have announced that Minecraft Story Mode will be launching on the PS3, PS4, Xbox 360, Xbox One & PC next month.

Like previous Telltale titles, Minecraft Story Mode will take place over 5 episodes that can either be bough alone or as part of a season pass.


In Minecraft: Story Mode, playing as either a male or female hero named ‘Jesse,’ you’ll embark on a perilous adventure across the Overworld, through the Nether, to the End, and beyond. You and your friends revere the legendary Order of the Stone: Warrior, Redstone Engineer, Griefer, and Architect; slayers of the Ender Dragon.

Episode 1 – The Order of the Stone will be available on Tuesday, 13th October.

Posted by Unknown at 20:10
Email ThisBlogThis!Share to TwitterShare to FacebookShare to Pinterest