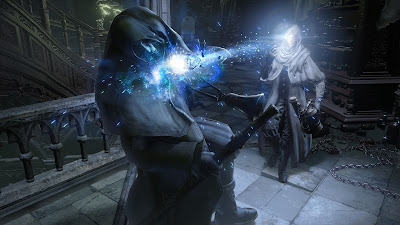 Sony have announced a new expansion for the hugely successful PS4 game, Bloodborne.  Entitled The Old Hunters, the expansion is releasing worldwide on the PS4 on November 24th for the reasonable price of $19.99 / €14.99 / £11.99.


The Old Hunters is set in a world where hunters of the past are trapped forever.  As you play through this new world you will uncover the stories of the hunters from the past, meat new NPCs and even discover the other side of the history of the world of Bloodborne.
New stages, dangers and beasts are to be expected and to assist you with the new challenge there will be new outfits, weapons and magic.

A special addition of the game is being released in Japan that contains the base game plus this new expansion.  This is due out in December with no release confirmed for the west.


Posted by Unknown at 18:48
Email ThisBlogThis!Share to TwitterShare to FacebookShare to Pinterest